Update Required To play the media you will need to either update your browser to a recent version or update your Flash plugin.
By Dan Friedell
11 May, 2016

When China's president visited Britain last year, newspapers were filled with predictions of a "golden era" for relations between the two countries.

Leaders from both sides talked of a bright future as President Xi Jinping and British Prime Minister David Cameron had drinks at a pub.

The Chinese delegation visited science, engineering and pop culture sites around London. Everyone had a happy face. 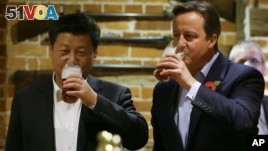 While they enjoyed a beer at a pub, Britain's Prime Minister David Cameron and Chinese President Xi Jinping may not be so friendly anymore.

But something else apparently happened during the visit.

A video crew records all of Queen Elizabeth's official events. The recordings are then shared with news agencies.

When people looked at the video, they heard an exchange between the Queen and Lucy D'Orsi, a police commander.

D'Orsi is presented to the Queen by The Lord Chamberlain, who is the top officer responsible for Britain's royal family. He tells the Queen D'Orsi was the commander during the Chinese visit.

The Lord Chamberlain said the police commander "was seriously, seriously undermined by the Chinese, but she managed to hold her own and remain in command."

D'Orsi called her experience during the state visit, "quite a testing time for me." She said the delegation "walked out" on both her, and Ambassador Barbara Woodward.

The Queen called the behavior both "rude" and "extraordinary."

Queen Elizabeth's comments were repeated on social media. They were unusual because the 90-year-old ruler almost never comments publicly on political issues.

When asked for clarification about what happened last year, both British and Chinese officials said the visit had been successful.

What do you think of the video showing the Queen and the police commander? We want to know. Write to us in the Comments Section or on 51VOA.COM.

rude – adj. not having or showing concern or respect for the rights and feelings of other people : not polite

pub – n. a building where alcoholic drinks and often food are served