Update Required To play the media you will need to either update your browser to a recent version or update your Flash plugin.
By Dan Novak
19 September 2022


Britain and the world said a final goodbye to Queen Elizabeth II at her state funeral Monday. Presidents, prime ministers, kings and princes came to honor her 70 years in power.

It was Britain's first state funeral since Winston Churchill's in 1965. Before the service, a bell rang 96 times — once a minute for each year of Elizabeth's life. Then, 142 Royal Navy sailors pulled the gun carriage with her coffin to London's Westminster Abbey, where around 2,000 people gathered for the ceremony.

The coffin was covered with the Royal flag. Atop it sat the Imperial State Crown, with almost 3,000 diamonds, along with the royal orb and scepter. Her son, King Charles III, and other members of the royal family followed the coffin into the church. 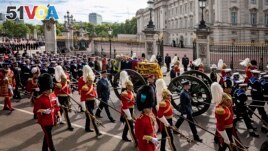 David Hoyle is the head clergyman of Westminster Abbey. As the funeral opened, he said: "Here, where Queen Elizabeth was married and crowned, we gather from across the nation, from the Commonwealth, and from the nations of the world, to mourn our loss, to remember her long life of selfless service..."

The service ended with two minutes of silence observed across Britain. And the attendees sang "God Save the King."

The day began early when the doors of the British Parliament closed to mourners. Many had waited for hours in line to walk by her coffin lying in state. Hundreds of thousands lined the sidewalks of central London to watch the coffin travel through the city after the service. Others went to parks and public spaces across Britain to watch the funeral on large screens. Millions more watched live television broadcasts around the world.

After the passage through central London, the coffin headed for Windsor Castle, where Elizabeth was buried in a private ceremony in St. George's Chapel.

Tracy Dobson was among the last people to join the line in London. "I felt like I had to come and pay my final respects to our majestic queen," she said. "She has done so much for us and just a little thank you really from the people."

Jilly Fitzgerald was in Windsor. She said there was a feeling of community among the mourners as they prepared to wait hours to see the queen's coffin.

"It's good to be with all the people who are feeling the same. It's like a big family because everyone feels that ... the queen was part of their family," she said.

U.S. President Joe Biden, French President Emmanuel Macron and Japan's Emperor Naruhito were among the world leaders at the ceremony. Others included all living former British prime ministers as well as European royalty.

On the evening before the funeral, King Charles III sent a message of thanks to people in Britain and around the world. He said he and his wife Camilla have been "moved beyond measure" by the large numbers of people who are mourning the queen.

Elizabeth was the 40th monarch in a family line that dates its history back to 1066. She came to power in 1952 and became Britain's first monarch after the end of the British Empire.

She oversaw her nation trying to build a new place in the world. She was very important in helping create the Commonwealth of Nations, now a grouping of 56 countries.

coffin — n. a box in which a dead person is buried

orb — n. a gold ball with a cross on top that is carried by a king or queen on formal occasions as a symbol of power and justice

scepter — n. a long decorated stick that is carried by a king or queen

monarch — n. a person such as a king or queen who rules a kingdom or empire