Update Required To play the media you will need to either update your browser to a recent version or update your Flash plugin.
By Jonathan Evans
16 August, 2018


Aretha Franklin, the American singer known as the "Queen of Soul," died Thursday at her home in Detroit, Michigan. She had spent many years battling cancer. She was 76 years old.

Franklin was born on March 25, 1942, in Memphis, Tennessee. But she was raised in Detroit. There, her father C.L. Franklin was a church minister. Her musical talent was recognized at a young age. She played piano and sang gospel music at her father's church services.

Franklin began singing pop and jazz music at age 18, when she signed a recording agreement with Columbia Records. 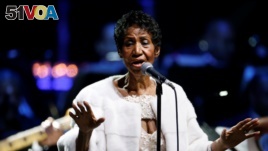 Aretha Franklin performs during the commemoration of the Elton John AIDS Foundation 25th year fall gala at the Cathedral of St. John the Divine in New York City, in New York, Nov. 7, 2017.

But her real success started in 1967 under an agreement with Atlantic Records. That agreement permitted her to sing with her natural gospel intensity.

Franklin gained national fame that year with a series of hit music recordings, including "Chain of Fools," "A Natural Woman," and her most famous hit, "Respect."

Franklin's career success continued into the 1980s and 1990s. She appeared in the 1980 film "The Blues Brothers." She also had new music hits, including "Freeway Of Love" and "A Rose Is Still A Rose."

Franklin earned more than 110 entries in Billboard magazine's music charts. That is the most by any woman in the magazine's history. In 1987, Franklin became the first woman to be inducted into the Rock & Roll Hall of Fame.

Franklin struggled with weight and health problems. But even in her older years, her voice remained a thing of wonder.

In 2009, she sang the American patriotic song "My Country 'Tis of Thee" at U.S. President Barack Obama's first inauguration.

gospel – n. a type of Christian music that was created by African-Americans in the southern United States

inauguration – n. the introduction of someone, such as a newly elected official into a job or position with a formal ceremony

induct – v. to officially make someone a member of a group or organization