Update Required To play the media you will need to either update your browser to a recent version or update your Flash plugin.
By Alice Bryant
09 September, 2017

Mindfulness is a method of quietly, but fully, experiencing what is happening in the present, both in and around you.

The mindfulness study involved 68 heavy drinkers in the United Kingdom. The subjects were not alcoholics, but they did have more alcohol to drink than most people. 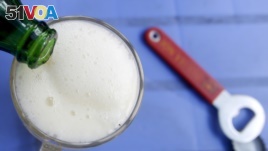 A drinker pours Saigon beers into a cup at a restaurant in Hanoi, Vietnam

Some of the subjects received training in relaxation methods. The other subjects took part in an 11-minute training program in mindfulness exercises. The program was designed to help them recognize their desire for a drink without acting on it.

Over the next week, the group that received mindfulness training drank much less than they had during the week before the study started. But the subjects in the relaxation group did not drink much less.

Damla Irez is with University College London. She says the study did not involve ‘treating' people who needed help cutting down their alcohol use.

"But it did suggest that people who drink too much, but don't have an alcohol use disorder, might be able to reduce their consumption, at least in the short term, by practicing mindfulness," Irez said by email. The Reuters news agency reported her comments.

A report on the study was published in The International Journal of Neuropsychopharmacology.

During the mindfulness training, people were told to pay attention to their desire to drink instead of ignoring this feeling. They were told that, by noticing bodily sensations, they could accept them as temporary events without needing to act on them.

The other group – those in relaxation training – was told that softening the muscles, calming and unwinding the mind and releasing tension in the body could reduce the desire to drink.

After receiving one of these trainings, all 68 people were asked to use the techniques they learned for one week.

Right after training, both groups reported a reduced desire for a drink although the reduction was greater in the relaxation group.

However, people in the mindfulness group drank 9.3 fewer units of alcohol in the week after the training than they did in the week before the study began. This is about equal to three pints of beer – or about 13,000 milliliters.

In the relaxation group, people consumed just 3 fewer units of alcohol. This difference was too small to rule out the possibility that the cause was chance.

One limitation of the study was the small number of subjects. Another limitation was that the researchers depended on the subjects to remember and report how much alcohol they drank. Researchers also depended on them to be honest about whether they had been diagnosed with alcohol use disorder. In addition, the study was too brief to show how much training people might require to see long-term changes to their drinking behavior.

William Marchand is a psychiatry professor at the University of Utah in Salt Lake City. He wasn't involved in the British study. But he said it was new and surprising that such a short training period would have an effect on behavior.

In an email to Reuters, Marchard said he would have thought much more training would be needed to change behavior. "What we don't know," he said, "is whether there will be a lasting impact on drinking behavior."

Still, the first step in targeting addictive behaviors is to notice them, said Stefan Hofmann, a psychology researcher at Boston University in Massachusetts. Hofmann told Reuters in an email that humans usually develop habits and link behaviors to situational signals.

For example, for drinkers, this might mean that being around certain people or in places, such as a bar, will make drinking more probable, he said.

Ordering another drink can become automatic in these situations, but becoming watchful of signs that lead to more drinking can help change how people react to these signs.

"This is why mindfulness can be a very powerful strategy," Hofmann said. He said it stops automatic behavior by making people more thoughtful.

Lisa Rapaport reported this story for Reuters. Alice Bryant adapted Her report for Learning English. George Grow was the editor.

heavy drinker – n. a person who drinks a large amount of alcohol

alcoholic – n. a person who often drinks too much alcohol and is unable to live a normal and healthy life

relaxation – n. something that you do to stop feeling nervous or worried

consumption – n. the act of eating or drinking something

diagnose – v. to recognize a disease or illness by examining someone

impact – n. a change that results when something is done or happens

addictive – adj. causing a strong and harmful need to regularly have or do something

automatic – adj. involuntary; done as if by a machine