Race to the Moon: The Days of Project Gemini

Update Required To play the media you will need to either update your browser to a recent version or update your Flash plugin.
By Marilyn Rice Christiano
14 August, 2012

EXPLORATIONS -- a program in Special English by the Voice of America.

SHIRLEY GRIFFITH: Today, Harry Monroe and Tony Riggs report about America's second manned space program, Gemini. Two astronauts flew on each flight. Gemini's purpose was to bring the United States closer to its goal of landing astronauts on the moon.

TONY RIGGS: The astronauts of America's first manned program, Project Mercury, made six successful flights. They proved that people could survive the hostile environment of space.

In nineteen sixty-five America's space agency, NASA, was ready to begin its second manned program. NASA called it Gemini. The program was named for the two stars Castor and Pollux in the star group Gemini. The Gemini program would send two astronauts at a time into space. 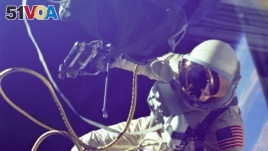 Ed White became the first American to perform a spacewalk on June 3rd 1965.
Gemini would test the men's ability to live and work in space. Gemini, it was hoped, would move America closer to its goal of landing astronauts on the moon.

HARRY MONROE: The first Gemini spacecraft would carry astronauts Virgil Grissom and John Young. Its Titan rocket could lift three times as much weight into space as the Atlas rocket used for the Mercury flights. The launch took place without a problem on March twenty-third, nineteen sixty-five.

Grissom and Young orbited the Earth only three times. But they did something that the Mercury astronauts had not been able to do. They changed their orbit while in space. The Gemini astronauts were developing the control that would be needed for a trip to the moon.

Ed White would leave the protection of the spacecraft and move out into the unknown emptiness of space.

TONY RIGGS: When it was time for him to leave the spacecraft, this is what the world heard: "Roger, Flight, we're GO." Those were the words from the flight director on the ground.

Then a voice came down from space. "He is ready to leave right now," called McDivitt. The astronauts had removed all air pressure from the spacecraft. Only their special space clothing would provide the air pressure they needed to stay alive.

HARRY MONROE: Slowly, Ed White moved out the open door. He was tied to the spacecraft by a long rope. He floated out and away from the spacecraft. Millions of people listened as he said: "This is the greatest experience. I am looking down right now. And it looks like we are coming up on the coast of California."

At space agency headquarters, doctors studied his medical condition as the information was being sent back to Earth. They said that being outside the spacecraft did not seem to affect him.

TONY RIGGS: It was time for Ed White to end his space walk. James McDivitt had to beg him to return. White was having a wonderful time. He wanted to stay out longer. Finally, he climbed back inside. He had floated around in the emptiness of space for twenty-one minutes.

Then a problem developed. The door of the spacecraft refused to shut tightly. The astronauts' clothing protected them during the flight. But what would happen during re-entry? James McDivitt had to try to repair the door.

HARRY MONROE: Scientists always knew it would not be easy for humans to work in the weightlessness of space. Each time an astronaut puts pressure in one direction, their body moves in the opposite direction. There is no gravity to hold them in place.

NASA scientists had tried to solve the problem by designing new tools for use in space. McDivitt tried one of the new tools. It worked. He was able to repair the broken door so it shut tightly.

Soon, the inside of the spacecraft began to fill up with all kinds of junk. McDivitt and White had to learn to sleep and work as things floated around their heads.

HARRY MONROE: On the sixty-second orbit, the astronauts prepared to return to Earth. They fired the spacecraft's control rockets. The spacecraft slowed and began to re-enter the atmosphere. It landed safely in the Atlantic Ocean.

Rescue helicopters reached McDivitt and White within seven minutes of landing. The two American astronauts were in excellent condition. They had made the first space walk. And they had proved that people could both live and work in space.

TONY RIGGS: The next Gemini launch was planned for just two months later. Gordon Cooper and Charles Conrad were to spend a record eight days in space.

Soon after the launch, Cooper and Conrad noted a problem that almost ended their flight early. They discovered a drop in pressure in the fuel cells that supplied electricity. These fuel cells powered the communications and computer systems. And they were very important to the environmental control systems in the spacecraft.

HARRY MONROE: Gemini's flight director decided to reduce the use of power on the spacecraft, instead of ending the flight early. Cooper and Conrad turned off the radar, radio, computer and even some environmental control systems. The spacecraft floated silently through space.

Suddenly the power began to increase. The astronauts turned the systems back on. By the third day in orbit, all was normal again.

Then another problem developed with the same fuel cells. The cells created electricity by mixing hydrogen with oxygen. The process also produced some water. But the fuel cells were producing too much water. Containers that held the water were filling up too fast.

NASA was worried that the extra water could destroy the power supply needed for the spacecraft's return to Earth. So, Cooper and Conrad again turned off most of the power in the spacecraft.

TONY RIGGS: Again, the spacecraft floated almost silently above the Earth. Communications were few. Cooper and Conrad could not do any of the planned experiments. But each day, they set another record for surviving in space.

Eight days after their launch, Cooper and Conrad fired the control rockets and re-entered the atmosphere. They had circled the Earth one hundred twenty times. They had seen one hundred twenty sunrises and sunsets. They had traveled more than five million kilometers. They had proved that people could live and work in space for the time it would take to get to the moon and back.

HARRY MONROE: Now, it was time for Gemini Six to make its mark in history. Walter Schirra and Thomas Stafford were the astronauts. Schirra had been the pilot on an almost perfect Mercury flight three years before. Stafford was from the second group of American astronauts.

They were to make the first effort at a space chase. The two men would chase another object orbiting Earth, a satellite. They would try to move their spacecraft as close as possible to the satellite. This move had to be successful before any moon landing could be attempted.

But things did not go as planned. The satellite that Schirra and Stafford were supposed to chase apparently exploded after it was launched. NASA postponed the flight of Gemini Six.

TONY RIGGS: Space agency officials had to find the reason for the failure of the target satellite. That would take valuable time. So, they decided to launch the next flight, Gemini Seven, instead of waiting.

The astronauts for that flight were Frank Borman and James Lovell. They planned to set another record -- fourteen days in space. It would be the longest, most difficult flight yet.
Then NASA considered another plan.

There was nothing wrong with the Gemini Six spacecraft. So, NASA announced that Gemini Seven would lift off on December third, nineteen sixty-five. Then, if everything else was ready, Gemini Six would be launched a few days later. It would attempt to meet in space with the orbiting Gemini Seven.

HARRY MONROE: NASA quickly added a warning to its plan. There was less than a fifty percent chance of success. But Americans were hopeful. If the plan succeeded, it would be the greatest space act since manned flights began.

We will continue our story of America's Gemini space program next week.

SHIRLEY GRIFFITH: This VOA Special English program, EXPLORATIONS, was written by Marilyn Rice Christiano. Your narrators were Tony Riggs and Harry Monroe. This is Shirley Griffith.
___

Editor's Note: Ed White was the United States' first spacewalker, on June 3, 1965. But the world's first spacewalker was Alexei Leonov of the Soviet Union, on March 18, 1965.
Related Articles
go top