Update Required To play the media you will need to either update your browser to a recent version or update your Flash plugin.
By Dan Friedell
06 June 2022


Spain's Rafael Nadal won his 14th French Open championship over the weekend. It was his 22nd major tennis tournament victory of his career.

The four major tennis tournaments are the Australian Open, the French Open, Wimbledon and the U.S. Open. A player wins the "grand slam" if they win all four tournaments in the same year.

Nadal now has two more major wins than his rivals, Roger Federer of Switzerland and Novak Djokovic of Serbia. 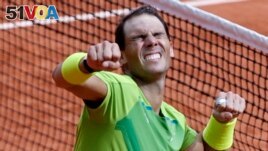 Spain's Rafael Nadal celebrates winning the French Open on Sunday. It was his 22nd major tennis championship and 14th in Paris. (AP/Jean-Francois Badias)

Nadal defeated Norway's Casper Ruud on Sunday in Paris. After his win, he said he may have to stop playing professional tennis because of foot pain. He said he had to receive pain-killing shots in his foot in order to play in the tournament.

Nadal said he only accepted the pain-killing shots because the French Open is so important for him.

At any other tournament, Nadal said, he would not have continued playing under such "extreme conditions."

Nadal is 36 years old. He is the oldest-ever champion of the French Open, which began in 1925.

Nadal said he could not feel his foot during Sunday's match. He is looking for other treatments that may help him keep playing. He said one possibility is to have a medical procedure that would "burn the nerve" that causes the pain.

Howard Fendrich writes about tennis for the Associated Press. He called Nadal "indefatigable" -- someone who can do something for a very long time without becoming tired. Nadal played two four-hour matches in the tournament, including one against Djokovic, the world's top player.

If the nerve treatments do not work, Nadal said he will have to think about "what's the next step in my future." He said, "I can't and I don't want to keep going" if he can only play using painkillers.

He thanked his family and supporters, including a doctor, for helping him in Paris. Without the doctor, he said, he would have had to give up earlier.

"I don't know what can happen in the future," Nadal said. "But I'm going to keep fighting to try and keep going."

Fendrich described Nadal's play as "crisp and clean" on Sunday, noting he hit 21 more winning shots than Ruud and made 10 fewer mistakes.

Nadal has never lost when he has made the French Open final.

The next big tournament is Wimbledon, near London. It starts in three weeks. Those who follow tennis, like Fendrich, said it is unclear if Nadal will play.

Nadal said tennis has been important in his life. He called it "a priority." However, he said it has not been more important than his own happiness.

Whatever happens, Fendrich said, Nadal's place in the sport's history is safe.

tournament – n. a sports competition with a series of contests over a number of days or week where a winner is eventually named

match– n. a sports competition or contest between two players or teams

shot– n. the act of putting something like medicine into the body with a needle

priority- n. the most important thing