Update Required To play the media you will need to either update your browser to a recent version or update your Flash plugin.
By Andrew Smith
21 January 2023

Red is nature's color of warning. Animals and plants with bright red colors are sometimes dangerous for other animals to eat.

Many Western countries also use red color for warnings. Red lights at train and road crossings warn drivers to stop. Red, as well as yellow, road signs tell people to be careful in dangerous areas. 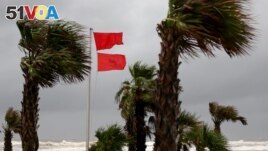 And if you see a red flag on an ocean beach, that means the water is too dangerous for swimming.

That brings us to today's expression: a red flag.

If we say something is a red flag, that means we think it will likely cause problems or lead to danger. Let's hear how this expression is used in conversation:

A: Did you know that Mary has a new boyfriend?

B: Yes, but I'm kind of surprised at her choice.

B: Well, he doesn't have a job, for one thing. And he was dismissed from his last two jobs.

In this example, the speakers think the boyfriend's work experience should be a warning to Mary.

We can also say something is a bad sign to mean the same thing as a red flag.

Many states in the United States have laws that try to prevent dangerous people from having guns. These laws are commonly called red flag laws.

When someone expresses concern or a warning over something, we say the person raises a red flag. For example, if people worry that a leader is making bad decisions, they might say those decisions are raising red flags.

As you can see, we use the expression red flag in many situations.

We use it mainly to warn about other people's behavior rather than natural dangers.

Unless you are at the beach. In that case, a red flag means you should stay out of the water!

See if you can find the use of raise a red flag in this VOA Learning English article about airport security.

You can also hear more examples of red flag in this English in a Minute video from VOA Learning English.

Keep learning new expressions with Words and Their Stories!

Until next time, I'm Andrew Smith.

Andrew Smith wrote this story for VOA Learning English. Hai Do was the editor.