Update Required To play the media you will need to either update your browser to a recent version or update your Flash plugin.
By VOA
16 October, 2012

Health officials in the United States are attempting to contact patients who recently received steroid injections for back pain. That is because the injections may have been carrying a fungus. Thousands of patients may be at risk of developing a rare form of fungal meningitis.

Health officials reported Monday that fifteen people had died from fungal meningitis linked to steroid shots. The Centers for Disease Control and Prevention said there were more than two hundred confirmed cases of the disease in fifteen states. The majority of the cases were in three states: Tennessee, Michigan and Virginia. 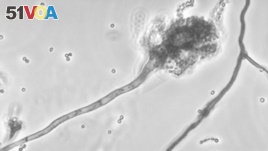 This photo made available by the Centers for Disease Control and Prevention shows a branch of the fungus Aspergillus fumigatus blamed for causing a meningitis outbreak.
Meningitis infects membranes that protect the brain and the spinal cord. There are five kinds of meningitis. Fungal meningitis is the rarest form of the disease. Other forms can result from bacteria, a virus or a parasite.

Last Thursday, officials reported that tests found evidence of the suspect fungus in more than fifty vials of the steroid. They said all those vials were manufactured by the New England Compounding Center in Massachusetts. The company has suspended operations and recalled all of its products for inspection.

Compounding or specialty pharmacies often custom-mix medicines at levels, and in forms, that may not be available from other manufacturers. Under Massachusetts law, compounding pharmacies are only permitted to make small amounts of made-to-order prescription drugs.

The patients who developed meningitis were being treated for back pain. The Centers for Disease Control says others who received the injections in their joints are not thought to be at risk.

John Jernigan of the CDC is investigating the meningitis outbreak.

"CDC is working with state and local health departments to contact patients who may have received injections at the facilities who received the recalled lots of this medication to inform (them) that they, that they may have been exposed, to find out if they're having symptoms, and to instruct them to seek health care should they be ill."

Dr. Jernigan says there are many different signs of fungal meningitis.

Health experts say they do not know how many people will actually become sick. They say it could take several months for a fungal infection to develop.