Rare Piece of Chinese Art Found at US Home Sale

Update Required To play the media you will need to either update your browser to a recent version or update your Flash plugin.
By John Russell
04 March 2021


A small bowl bought for $35 at a home in Connecticut turned out to be a rare piece of ancient Chinese art.

The white bowl has blue paintings of flowers and other designs. It is about 16 centimeters across.

The company holding the auction, Sotheby's, says the object was found at a yard sale in the New Haven area last year. A yard sale is a sale of used objects held at the seller's home.

A collector of old objects, or antiques, saw the bowl at the sale and thought it could be something special.

The piece is one of only seven such bowls known to exist in the world. It will go up for sale in New York on March 17 as part of Sotheby's Auction of Important Chinese Art.

The unidentified buyer paid $35 for the bowl and later emailed information and photos to Sotheby's asking for an estimate of its value. Angela McAteer and Hang Yin, the auction house's experts on Chinese art, get many such emails every week. But this one was the kind they dream about.

McAteer, Sotheby's senior vice president and head of its Chinese Works of Art Department, said it was clear "that we were looking at something really very, very special."

McAteer added, "The style of painting, the shape of the bowl, even just the color of the blue is quite characteristic of that early, early 15th century period of porcelain."

Porcelain is a hard, white substance made by heating clay, a kind of heavy, sticky material. 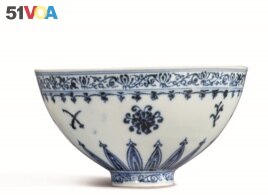 COURTESY SOTHEBY'S This photo shows a small porcelain bowl bought for $35 at a Connecticut yard sale that turned out to be a rare Chinese artifact worth between $300,000 and $500,000. The bowl will be offered in Sotheby's Auction of Important Chinese Art, in New York, on March 17. (Courtesy Sotheby's)

The two experts confirmed the bowl was from the 1400s when they were able to look at it in person. There are no scientific tests, only the trained eyes and hands of experts. The bowl was very smooth to the touch, and the color and designs were clearly from the period.

McAteer said all the information helped them "identify it as a product of the early Ming period."

McAteer said only six other such bowls are known to exist, and most of them are in museums. No others are in the United States.

How the bowl ended up at a Connecticut yard sale remains a mystery. McAteer said it is possible the bowl was passed down through generations of the same family who did not know how special it was.

"It's always quite astounding to think that it ... still happens, that these treasures can be discovered," McAteer said. "It's always really exciting for us as specialists when something we didn't even know existed here appears seemingly out of nowhere."

Dave Collins reported on this story for the Associated Press. John Russell adapted it for VOA Learning English. Bryan Lynn was the editor.

bowl – n. a round container that has tall, curving sides and that is used for preparing or serving foods and liquids

astounding – adj. causing a feeling of great surprise or wonder

specialist – n. a person who has special knowledge and skill relating to a particular job, area of study, etc.