Update Required To play the media you will need to either update your browser to a recent version or update your Flash plugin.
By Caty Weaver
31 January, 2016


Scientists say they have captured photographs of one of the most mysterious known animals: bush dogs.

Bush dogs live in Central and South America. They are a rarely seen and threatened species. But the photos suggest they may be more common than scientists thought.

Scientists used cameras that take photos in the forest when an animal passes by. Photos of the bush dogs were taken in wild areas of Panama. The traps can be found across the country from its Costa Rican border to its border with Colombia. 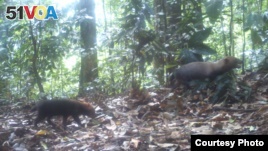 Ricardo Moreno is a research associate for the Smithsonian Institution. He and a team of biologists from Yaguará, Panama are studying large, wild mammals in that country. He says, "The bush dog is one of the rarest species that we photograph."

The researchers describe the animals as "short-legged and stubby, standing only about a foot (30cm) tall at the shoulder."

Like other dogs, bush dogs hunt in packs of up to 10. They are known to communicate to each other using "high-pitched whines." They eat mostly large forest rodents.

The bush dog is so elusive that photos of the animal were made only 11 times over 32,000 camera days. That is the number of cameras multiplied by the days in operation.

The International Union for Conservation of Nature says bush dog populations have dropped by up to 25 percent over the past 12 years. It is considered a "near-threatened" species.

Humans do not hunt or directly threaten bush dogs. But, habitat loss is affecting their numbers. They live mainly in rainforests. Scientists think the animals may require large forest spaces to survive. It is estimated that Panama lost 15 percent of its rainforest from 1990 to 2010.

Caty Weaver adapted this story from a VOA news report. Kathleen Struck was the editor.

We want to know what you think of this story. Post a message in the Comments Section or on 51VOA.COM.

pack - n. a group of usually wild animals that hunt together

rodent - n. a small animal (such as a mouse, rat, squirrel, or beaver) that has sharp front teeth