Update Required To play the media you will need to either update your browser to a recent version or update your Flash plugin.
By Dan Friedell
14 May 2022


In 2021, sports fans around the world learned about the issue of women's mental health in sports from Simone Biles and Naomi Osaka.

Osaka is a champion Japanese tennis player. But last year she said she did not want to talk to news reporters at the French Open tennis competition. After her first match, Osaka decided to withdraw from the event. She said critical questions from reporters made her lose confidence in her ability to play.

Later on, Osaka said she felt long periods of intense sadness known as depression after winning the U.S. Open in 2018. 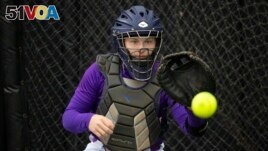 At the postponed Summer Olympics in Tokyo, top American gymnast Simone Biles did not compete in some of her best events. She said she felt too much pressure to perform. She said she was "fighting" with herself. Biles left the gymnastics team competition and the American gymnastic team got the silver medal instead of the gold.

Biles did return to competition at the Olympics and won a bronze medal. When the Olympics ended, she said she would take some time off but has not said whether she will try to compete at the 2024 Olympics in Paris.

Almost one year later, Osaka is playing tournaments again. She recently made it to the finals of the Miami Open in the American state of Florida.

Not only professional athletes

Osaka and Biles are two of the most famous female athletes in the world. But college athletic officials in the U.S. are concerned that not enough is being done to support the mental health of young women athletes.

Many women compete in sports for colleges and universities. Their softball games and soccer games are not seen by millions of people on television. But their health is still an important issue.

In addition, some young women athletes are now making money in their sports and feel pressure to present an image and meet the requirements of sports business deals.

But this year, the deaths of female athletes showed that mental health is just as important as physical health. Three American college student-athletes died by suicide. Katie Meyer was 22. She was a soccer player for Stanford University in California. Sarah Shulze was a 21-year-old runner at the University of Wisconsin. The third was 20-year-old Lauren Bernett, a top softball player on the team at James Madison University in Virginia.

Paul Newberry is a writer for the Associated Press. In a recent opinion piece, he wrote: "May their deaths not be in vain."

That means he hopes that the officials who supervise college sports consider mental health just as important as physical health. He suggested they should do more to keep young athletes who may be depressed from harming themselves.

Jane Timmons-Mitchell is a psychology professor at Case Western Reserve University in Cleveland, Ohio. She talked with Newberry and said often when people hear about young people killing themselves, they ask "why?" But she wants people to ask: "'What?' What can we do about it? How can we be the most help and the most effective?"

Paul Myerberg writes about sports for the USA Today. He said some groups of large universities with sport ties, known as conferences, are trying to help athletes with their worries and concerns.

Kevin Warren leads one group of schools called the Big Ten Conference. He said: "This initiative is designed to remind all of us, especially our student-athletes, to prioritize our mental health and seek professional help when needed."

Newberry said the stories of the three young women should make people "renew" their commitment to helping those in need. Newberry called for being watchful and to have "love and compassion" rather than judgment for others.

Out of the dark

Allison Schmitt won four gold medals in her Olympic swimming career. She said she thought about harming herself even after winning medals at the London Olympics in 2012. She said no one ever wants to feel that way "but this feeling is a reality for many people and their families."

Schmitt said many people who feel as if they want to hurt themselves are scared but do not know how to "get out of the dark place." It took her three years after the Olympics to find help from a professional.

Timmons-Mitchell said many people felt alone over the last two years because of the COVID-19 pandemic. Restrictions made it harder for athletes to stay in contact with friends who were not on their sports teams.

As much as they love their sport, Timmons-Mitchell said, some athletes felt as if the sport took over their identity.

"It's really the perfect storm," she said of the pandemic.

Dr. Ashwin Rao is a sports doctor at the University of Washington. During the pandemic in late 2020, he gave a presentation to the American Medical Society for Sports Medicine. He said depression affects young women more often than other groups. Rao said, during the pandemic it has been harder for coaches and sports doctors to spend time with college athletes.

As a result, they have not been able to recognize changes in behavior. He suggested a fix:

"(Spend) time around your athletes as best as you can so you know who they are. So if their behavior changes, you can identify it," he said.

Dan Friedell adapted this report for Learning English based on a story by The Associated Press.

confidence– n. the feeling that you can do something well and succeed

athletes– n. a person who is trained in or good at sports

in vain – phrase: used to mean not producing the desired result

initiative – n. a plan or program intended to solve a problem

prioritize – v. to make something the most important thing in a group

stigma – n. a set of negative or unfair beliefs that a society has about something

compassion – n. the feeling of wanting to help someone who is sick or in trouble

medal – n. a piece of metal in the shape of a coin, given in honor of an achievement, such as winning a competition