Update Required To play the media you will need to either update your browser to a recent version or update your Flash plugin.
By Dan Friedell
03 January 2022


It is rare to see a big, winter fire in Colorado like the one that burned 24 square kilometers of land and homes outside the city of Denver last week.

Usually, the ground is covered with snow in December. However, scientists say a long, dry period in the state helped the fire move quickly. Some say winter fires will become more common because of a changing climate.

The fire is being called the Marshall fire because it started near Marshall Road near Boulder, Colorado. Local newspapers say, as of Sunday, two people were missing and seven were injured. Nearly 1,000 homes burned and over 100 were damaged. 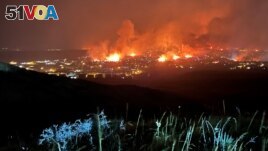 The fires are becoming more dangerous as homes are built in areas that once were farms or rural areas.

Jonathan Overpeck is a professor who studies the environment at the University of Michigan. He said winter fires like the Marshall fire are not common. He said "things are going to ... get worse unless we stop climate change."

Tens of thousands of people were told to leave the area northwest of Denver when the fire spread quickly last Thursday. Strong winds of over 160 kilometers per hour pushed the flames.

Susy Pringle lives in the area. She said she was in a food store, walked out, and had to get in her car and "make a dash" for her life as the smoke and flames came close.

Keith Musselman studies snow and water in nearby Boulder, Colorado. He said if snow had been on the ground, as it often is in December, the fire would not have spread.

Jennifer Balch is a fire scientist at the University of Colorado in Boulder. She said the dry ground, warm weather, an ignition source, and the strong wind created "a disaster."

Balch said a wet spring caused wild grass to grow tall, while the dry summer and autumn made it burn easily. She added that the time for fire danger in Colorado is now longer than in the past because of climate change.

In addition, the area northwest of Denver has many more homes today than in the past. Thousands of new houses have been built since the 1990s in the area from Denver to Fort Collins, a distance of about 100 kilometers. Balch said the homes can catch on fire and people can get hurt more easily.

In her explanation, Balch said that there are many more people in the area than before. A recent study by the University of Colorado showed that 97 percent of wildfires were started by people.

She said people need to start thinking about how their daily activities can start a fire.

And now that people are living in areas that used to be rural, she said, big fires like the Marshall fire are going to be more common.

"It's just a matter of time before we have whole towns burning down like we had in California and events like this in Colorado."

Dan Friedell adapted this story for Learning English based on a report by Martha Bellisle of the Associated Press.

Are you worried about big fires where you live? What are people doing to prevent them? Tell us in the Comments Section and visit 51VOA.COM.

dash – v. to run or move quickly or suddenly