Update Required To play the media you will need to either update your browser to a recent version or update your Flash plugin.
By Jonathan Evans
06 November, 2019


Scientists say expanding the world's conservation areas to help protect animals and plant life is unlikely to be effective on its own.

The reason: rising levels of human activity in and around protected natural areas.

Cambridge University researchers studied thousands of conservation areas in more than 150 countries. They found that, in general, recognizing spaces as protected is not reducing human activity in at-risk areas.

The researchers found that a lack of money to pay for land protection is affecting conservation efforts. So is a lack of interaction between people who live in protected natural areas and outsiders.

Creating protected areas is something "that we know can work, we know is absolutely essential for conserving biodiversity," says Jonas Geldmann. He was the lead writer of a report on the study. Geldmann works for the University of Cambridge Conservation Research Institute.

The study noted that about 17 percent of the world falls within protected areas. These include national parks, nature reserves and wilderness areas. That information comes from the International Union for Conservation of Nature's World Database on Protected Areas.

Protected areas are important for supporting environments with many different kinds of plants and animals.

Andrew Wetzler is head of the nature program at the Natural Resources Defense Council, an environmental group based in the United States. He says "Protected areas are one of the most important things that we can do to stem the loss of biodiversity and to help solve the climate crisis." He spoke to the Reuters news agency.

Cambridge researchers said their study is the largest of its kind.

From lights to crops

Scientists examined over 12,000 protected areas between 1995 and 2010. They used population counts and information about crop harvests to measure the effect of human activity. They also studied satellite evidence of agriculture and lighting at night.

The researchers found evidence of increased human activity in most protected areas in every area. However, they noted that human activity appeared to be more of an issue in nations with fewer roads and a lower ranking on the Human Development Index. The index uses information about life expectancy, education and earnings to rate countries on human development. 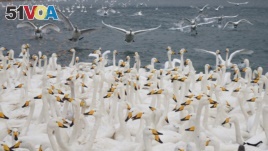 Across the northern hemisphere and Australia, protected areas often proved effective at slowing human activity when compared with unprotected areas.

But in South America, Southeast Asia and African countries south of the Sahara Desert, pressure from human activity inside protected areas was notably higher.

The study found agriculture is a major driving force behind human activity in protected areas.

For example, African mangrove forests listed as protected experienced 13 percent greater losses to agriculture than unprotected mangrove areas between 1995 and 2010.

Andrew Wetzler said, "Simply designating a place as protected can't be the beginning and the end of a conservation effort."

Experts add that working with local communities and involving them with conservation efforts is also important.

Rosa Furneaux reported this story for the Reuters news agency. Jonathan Evans adapted it for VOA Learning English. George Grow was the editor.

engage – v. to get and keep someone's attention, interest, etc.

park – n. a large area of public land kept in its natural state to protect plants and animals

reserve – n. an area of land where animals and plants are given special protection