Update Required To play the media you will need to either update your browser to a recent version or update your Flash plugin.
By Patrick Merentie
04 July, 2016


Global Witness says 2015 was the most dangerous year yet for environmental activists.

The group reports that 185 people across 16 countries were killed last year while defending the environment.

Global Witness is a non-profit organization that follows environmental issues and corruption around the world. The organization released a report called "On Dangerous Ground" in June. 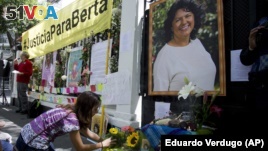 A woman places flowers on an altar set up in honor of Berta Caceres during a demonstration outside Honduras' embassy in Mexico City.

The report says that on average, more than three activists were killed every week last year while defending the environment and land rights.

Global Witness campaign leader Billy Kyte spoke to VOA. He said the number of killings increased by almost 60 percent from 2014 levels. He blamed industrial growth for the problem.

"So we are seeing industries like mining, dam and agribusiness encroaching more and more into previously untouched areas rich in resources and coming into conflict with local communities..."

The Global Witness report said 42 deaths were related to the mining industry.

Brazil had the largest number of deaths, with 50 killings last year, the report said. The Philippines had 33 killings, the second largest number. Colombia had 26 killings. Peru and Nicaragua each had 12, while the Democratic Republic of Congo reported 11 killings.

Global Witness is not the only group following environmental killings. The Inter-American Commission on Human Rights, or IACHR, follows human rights in South and Central America. It reported that at least six land activists were killed in Brazil in early 2016.

Billy Kyte says the true number of killings has not been accurately reported because of fear and threats of possible attack. He blamed what appeared to be close ties between big business and government.

"So, in Africa it has been more difficult to get information. This may be because of oppressive regimes, which means it is harder to get data on how many people are being killed or threatened..."

Activists with a lot of media attention are often targets for violence or police action.

Nasako Besingi of Cameroon was threatened with jail time for opposing palm oil companies. In India, journalist Sandeep Kothari was beaten and burned to death for criticizing mining.

Global Witness is demanding better protection for environmental activists from governments. The group also asks for increased legal action against these crimes.

Anita Powell reported this story for VOANews. Patrick Merentie adapted her report for Learning English. George Grow was the editor.

agribusiness – n. the business or industry of farming or agriculture

encroach(ing) – v. to gradually take or begin to use or affect something that belongs to someone else or that someone else is using

palm – n. a kind of tree that grows in tropical regions and has a straight, tall trunk and many large leaves at the top of the trunk