Update Required To play the media you will need to either update your browser to a recent version or update your Flash plugin.
By Phil Dierking
07 March, 2018


New weather information shows the Arctic just had its warmest winter on record.

The same information also shows that sea ice hit record lows for this time of year. That means there is plenty of open water in the Arctic Ocean, where ocean water normally freezes into thick pieces of ice.

Scientists told the Associated Press what is happening now has never happened before. They say it is part of a vicious cycle, a series of cause and effect events, in Earth's atmosphere.

The scientists believe that climate change could be fueling these changes. They say slowly rising temperatures in the atmosphere are likely influencing strong icy, storms in Europe and the northeastern United States.

Serreze has been studying the Arctic since 1982. "These heat waves, I've never seen anything like this," he said.

Unusual temperatures across the Arctic

This past winter has been so warm that the land weather station closest to the North Pole, at the top of Greenland, spent more than 60 hours above freezing last month. Before this year, scientists had only seen temperatures there briefly rise above freezing in February only two times before. 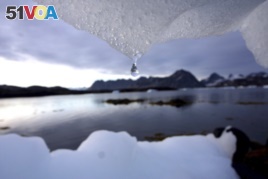 FILE - An iceberg melts in Kulusuk, Greenland near the arctic circle. A new report finds permafrost in the Arctic is thawing faster than ever before.

On February 24, 2018, the temperature at the top of Greenland reached six degrees Celsius, setting a record for that date.

The warmer weather reached other parts of the Arctic Circle. In Barrow, Alaska, the temperature in February was 10 degrees warmer than normal. All winter long, the average temperatures were 7.8 degrees Celsius higher than normal.

At over 30 different Arctic weather stations, 15 of them were at least 5.6 degrees Celsius above normal for the winter. That information comes from climate scientist Brian Brettschneider of the International Arctic Research Center at the University of Alaska Fairbanks.

Less ice and a vicious cycle

Sea ice is frozen ocean water that forms, grows and melts on the ocean. Near Greenland, warm air moved north over part of the Atlantic Ocean that usually has sea ice. Something similar was also happening in the Pacific Ocean, creating open water on normally frozen parts of the Bering Sea, said data center scientist Walt Meier. To be happening on opposite sides of the Arctic at the same time is unusual, he added. 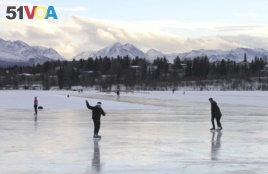 While some natural weather systems were involved, climate change is the most important influence, Meier said. "When you have warmer temperatures, you are going to melt more ice and it's going to grow more slowly."

In the winter, sea ice "acts as a lid to keep the warmth of the water at bay." But when there is less sea ice, more heat goes into the air, Brettschneider said. "You end up with a vicious cycle of warm air preventing sea ice formation and lack of sea ice allowing warmth to escape into the air."

Seth Borenstein wrote this story for the Associated Press. Phil Dierking adapted his report for VOA Learning English. George Grow was the editor.

Have you experienced warmer winters? We want to hear from you. Write to us in the Comments Section or on 51VOA.COM.

arctic - adj. of or relating to the North Pole or the region around it

cycle - n. a set of events or actions that happen again and again in the same order

stuff - n. a group or pile of things that are not specifically described

at bay - phrase. in the position of being unable to move closer while attacking or trying to approach someone