Update Required To play the media you will need to either update your browser to a recent version or update your Flash plugin.
By Faith Pirlo
01 October 2022


Marilyn Monroe was a famous American movie actress from the 1950s and early 1960s. Her life is being detailed in a new movie on Netflix, Blonde. It stars Ana de Armas as Marilyn Monroe.

Monroe was well-known for her costumes in the movies.

She wore a bright pink long dress to sing the song Diamonds Are a Girl's Best Friend. And most famously, she wore a white dress that blew up as she walked over the subway in the movie The Seven Year Itch. 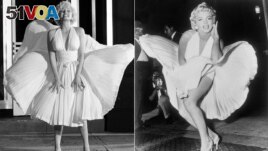 In this combination of photos, Ana de Armas as Marilyn Monroe in a scene from Blonde, left, and Marilyn Monroe posing on the set of "The Seven Year Itch" in New York on Sept. 9, 1954. (Netflix via AP , left, AP Photo/Matty Zimmerman)

The costumes have been talked about in popular culture. They have been recreated and reimagined many times in Hollywood movies and even in low-cost clothing shops.

In 2011, the famous white dress that Monroe wore was bought for $4.6 million. And a copy of the dress went for $120,000 several years later. That explains why Jennifer Johnson felt a lot of pressure to get the costumes just right for the movie Blonde.

As costume designer for the movie, Johnson was not able to study Monroe's costumes in person. Johnson and her team watched films, looked at photos, and used information from a book by William Travilla who was responsible for Monroe's famous looks.

Even though the team could not use the same materials to make the costumes for Blonde, Johnson said it was important that the structure of the dresses was similar, so that they would not look like low-priced copies.

She had read in Travilla's book about problems that happened with the dresses. For example, when the pink dress was not moving correctly when Monroe walked down the stairs in Gentlemen Prefer Blondes, Travilla used green felt, a material usually found on pool tables, to support the dress.

While Johnson did not use the same pool table material as Travilla, she understood the issue and recreated the dress with new material. Johnson said that it is always easier to make new clothes than to find something old. "It's quite hard to find existing things," she said.

The most difficult one to recreate was, of course, the white dress from The Seven Year Itch. The dress has many pleats in which the material is folded over itself. It needs a special structure that few places can make anymore.

Johnson said it took about 45 meters of material for her team to recreate the white dress because of problems with the pleats. "It was incredible how much fabric it took to create the arc and the drama of that dress when it blows up with the subway grate..." she said.

But in the end, it was worth creating that special moment. "It's so beautifully shot by Chayse Irvin, our amazing cinematographer, Johnson said.

Monroe's everyday style was more casual. Johnson and Andrew Dominik, the director, dressed Ana de Armas as Monroe with Capri pants that are cut off just below the knee and sweaters. Some of the pieces were old clothes found in Los Angeles costume houses. Johnson wanted the clothes to be as natural as possible to fit de Armas's body and to be understood by modern movie watchers.

Johnson then added, "Those dresses are so iconic, they could easily overtake the actor and become all about the costume. And I always wanted it to be complementary to Ana's incredible performance."

Lindsey Bahr wrote this article for The Associated Press. Faith Pirlo adapted it for Learning English.

dress – n. a piece of clothing for a woman or girl that covers the body and part or all of the legs

subway – n. a system of underground trains in a city

pleat – n. a double fold in item made of cloth, held together by stitching

fabric – n. woven or knitted material; in this case special cloth made to use in a garden

cinematographer – n. a person whose job it is to film movies

casual – adj. not formal; done without much thought or effort

iconic — adj. describing a widely known image, object or person that represents something; a person who is very successful and famous

complementary -adj. serving to make whole or improve something, to add to or enhance the qualities or what is already there.