Update Required To play the media you will need to either update your browser to a recent version or update your Flash plugin.
By VOA
21 September, 2014


Many people have heard about the shooting of an unarmed black teenager in the United States. A white police officer shot and killed the young man last month in Ferguson, Missouri. His death fueled days of unrest and racial tension in the city, just outside Saint Louis.

The incident demonstrated the racial anger between police and Ferguson's African American community. Now, some African-American parents and social workers are talking to young people about how to act when stopped by police.

African-Americans in Ferguson have long objected about racial bias, or favoritism, in policing. They say police officers abuse their power by unfairly targeting them for stops and searches. Many families worry that their children will have a bad experience with police.

"I just tell the youngsters to be careful, man, and if the police say ‘come' to you all and say something to you, do what they say!"

Tensions have increased between the mostly black community and police after the shooting death of Michael Brown. Officer Darren Wilson, who is white, shot the unarmed teenager on August ninth.

"They are just starting to shoot and kill and it is alarming. It is very alarming. I think that it is a new shift in how we (black people) are being seen and how we are being treated. And we better pay attention so we can get that shift back and bring some order and some harmony back." 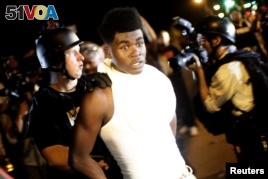 A police officer in riot gear detains a demonstrator protesting against the shooting of Michael Brown, in Ferguson, Missouri August 19, 2014.

Rudy Davis is a Washington D.C. radio personality. He serves as a mentor – a guide and friend – to young African-Americans. He says they rarely think about what can happen when they are stopped by police.

"We don't know that just saying ‘yes' or just stopping in our actions, whatever it is that we are doing, just stopping could help you."

Some African-American parents are talking with their children about how to prevent conflicts with police. Ivy Hylton has some suggestions.

"I talk with young people all the time about what we call ‘street law' – being able to understand your rights, being able to know exactly what to do if a police officer comes to you."

Edward Tate offers advice to young people. He believes education is of great importance to changing their behavior with police.

"We have to re-educate our people into the true knowledge of themselves as it relates to their essence, their culture, their background, so that may instill a sense of pride, the positive pride and a sense of dignity to the point where it will allow us to regulate our behavior as self-respecting people."

The police chief of Ferguson says his force will work to win back the trust of the community.

But civil rights activists predict there will be more demonstrations in Ferguson and in other places. They say this will happen because people are frustrated with what they believe is more police oppression of African Americans.

*This story was based on a report from VOA reporter Chris Simkins. Jeri Watson wrote it in Learning English. George Grow was the editor.

essence - n., the basic nature of a thing

background - n., the total of a person's experience, knowledge and education

instill - v., impart gradually, example, help another person gain something, such as a love of music

dignity - n., the quality of being worthy, honored or esteemed