Refugee Camp in Jordan Is Biggest in Middle East

Update Required To play the media you will need to either update your browser to a recent version or update your Flash plugin.
By VOA
09 August, 2015


The United Nations refugee agency says hundreds of thousands of Syrians who fled to Jordan to escape the war in Syria face a difficult future. Tens of thousands of these Syrians live in the Zaatari refugee camp. The camp was set up three years ago in just nine days. It has grown as the Syrian conflict has worsened. It is now the largest refugee camp in the Middle East.

The fighting in Syria started more than four years ago, with a series of protests against the government. The United Nations estimates that since March of 2011, about 200,000 people have been killed in the fighting.

The U.N. High Commissioner for Refugees says more than four million Syrians have fled the country. U.N. officials believe about 7.6 million others have fled their homes, but remain in Syria. 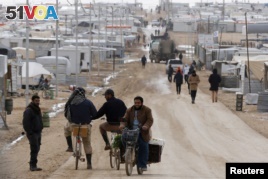 Syrian refugees travel on the main street of Al Zaatari refugee camp in the Jordanian city of Mafraq, near the border with Syria, Jan. 15, 2015.

Ariane Rummery works for the refugee agency. She says that more than half of the 81,000 Syrians in the Zaatari camp are children. She says educating them is a difficult job.

"One in every three children inside Zaatri camp is outside of formal or informal schooling. There's also about nine and a half thousand (9,500) young people between 19 and 24 who need skills training and lack other ways to make a living. About five percent of these young people were at university in Syria, but had to drop out because of the conflict, and only 1.6 percent of those had managed to graduate."

As difficult as life is in the camp, conditions are worse for the more than 500,000 Syrian refugees who are trying to survive in Jordanian cities. A recent study shows about 86 percent of them earn less than $95 a month.

Ms. Rummery says these urban refugees are getting aid from the U.N. refugee agency, the World Food Program and other agencies. But, she says, it is not enough, and they are forced to make difficult decisions.

"Things like pulling children out of school. It means begging, it means child labor. It is easier for children to work under the radar in Jordan, for example, and so families often are having to rely on their children to work because of their very difficult economic situation."

Ms. Rummery says only about 45 people a day now enter Jordan from Syria. She says that is because Jordanian officials are limiting the number of refugees. She says a growing number of refugees are returning to Syria because it is too difficult to survive in Jordan.

formal – adj. received in a school

beg – v. to ask people for money or food

under the radar – idiomatic phrase. not detected or noticed; not following rules

Is your country dealing with a large number of refugees? We want to hear from you. Write your thoughts in the comments section.