Update Required To play the media you will need to either update your browser to a recent version or update your Flash plugin.
By Dan Novak
08 August 2021


Salimullah has been living in the Indian capital of New Delhi since 2013 when he escaped violence in Myanmar. A Rohingya refugee, the 35-year-old now lives in a small temporary shelter with up to 10 other people at a time.

He and his family have been surviving on donated food. But he has to return to work soon, even with the risk of getting COVID-19 and infecting others.

A few refugees in India have begun getting vaccines. But no one in his camp has received shots. Just over 7 percent of India's 1.4 billion people are fully vaccinated.

"The disease doesn't discriminate. If we get infected, locals will also," Salimullah told The Associated Press.

For months the World Health Organization (WHO) urged countries to vaccinate refugees. The WHO placed them in the second most at-risk group, along with those with serious health conditions.

Sajjad Malik is director of the United Nations refugee agency. He said refugees live in crowded conditions where the virus can spread more easily. They also have little access to health care or clean water.

Over 160 countries included refugees in their vaccination plans. But those plans have been changed by supply shortages. The WHO says that about 85 percent of vaccines have been given out by rich nations. At the same time, it estimates that 85 percent of the world's 26 million refugees live in developing countries struggling to vaccinate the most vulnerable.

Some countries, like Bangladesh, had high hopes for COVAX, an international program that aims to provide vaccines to poorer nations. Bangladesh had plans in February to vaccinate almost 1 million Rohingya refugees in its crowded camps on the border with Myanmar. But so far, Bangladesh has only received 100,620 vaccine doses from COVAX.

Worldwide, the COVAX program has provided less than 8 percent of the 2 billion vaccine doses it had promised by the end of this year.

Even in countries where refugee vaccinations have started, supplies remain low. In Uganda's Bidi Bidi camp, less than 2 percent of 200,000 refugees have received a single shot of the AstraZeneca vaccine. Second doses are also in short supply after India stopped donating them when its own virus cases greatly increased. 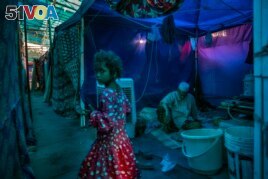 A young Rohingya refugee girl walks past an elderly man sitting inside a tent at a refugee camp alongside the banks of the Yamuna River in the south-eastern borders of New Delhi. (AP Photo/Altaf Qadri)

Some countries, like India, first required documents like passports or other government identification to sign up for vaccines. But many refugees do not have that identification. India eased the requirements in January, but language barriers and misinformation about vaccines continue to cause problems.

Frido Herinckx is with the Red Cross and helps run the organization's COVID-19 operations in Europe. He told the AP that while refugees are getting shots in European Union countries, the situation is much worse in other areas. For example, only 1.5 percent of people in Armenia and 4.2 percent in Ukraine are fully vaccinated.

In some countries, like Montenegro, the fear of arrest or deportation remains a barrier. Herinckx said Red Cross volunteers go with the refugees to get their shots and then make sure they are not arrested afterwards.

Miriam Alía Prieto is an adviser for Doctors Without Borders. She said the organization wants to get vaccines from the manufacturers but does not want to accept liability. Many vaccine makers have refused to enter deals for vaccines without that requirement.

The U.N.'s Malik says as COVID-19 continues to spread, some countries could face great difficulties if they cannot find ways to effectively vaccinate their refugee populations.

"The virus doesn't distinguish between a national and a refugee," he said. "So, if you don't protect and save your refugee population, it becomes a public health issue."

Victoria Milko and Aniruddha Ghosal reported this story for The Associated Press. Dan Novak adapted it for VOA Learning English. Bryan Lynn was the editor.

discriminate — v. to unfairly treat a person or group of people differently from other people or groups

access — n. the right or ability to approach, enter or use

dose — n. the amount of a medication to be taken at one time

deportation — n. the act of forcing (a person who is not a citizen) to leave a country

liability — n. the legal responsibility for something