Update Required To play the media you will need to either update your browser to a recent version or update your Flash plugin.
By Faith Pirlo
12 August 2022


Hello! This week on Ask a Teacher, we will answer a question from Jego about the difference between "refuse" and "reject." 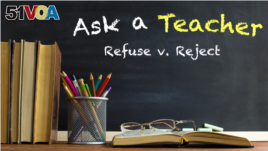 What is the difference between, "refuse" and "reject?"

Thanks, Jego from Ethiopia.

Thank you for your question.

Both "refuse" and "reject" are verbs. They can also be used as nouns. As verbs, they can have a similar meaning, but there are slight differences in how we use them.

We commonly use "refuse" with another infinitive verb to say we are not willing to do something. For example:

I refuse to go outside today because it is too hot.

She refused to take the crowded subway.

We can also use the verb "refuse" with a direct object to say we do not accept or want it.

I refused another piece of cake.

He refuses her invitation to dinner.

Lastly, "refuse" can also mean not permitting or letting someone do or have something. For example:

The supervisor refused his request for more money.

As a noun, "refuse" means garbage that is thrown out regularly. The stress is on the first syllable of the word. So instead of "re-FUSE "(a verb), we say it as "RE-fuse." It is not very common to use this word in everyday speech, but here is an example.

Our neighborhood collects refuse every Monday, including garbage and recycling.

As a verb, "to reject something" means that you completely do not accept something or that you do not agree to it. We use "reject" with a direct object. For example,

There are specific ways we can use "reject." Proposals, applications, offers or requests can be "rejected," especially, if minimum requirements were not met.

My visa application was rejected because I forgot to sign it.

Another use of "reject" is when we talk about the human body. Sometimes the body rejects a new organ or even the food we eat.

After her kidney transplant, Selena Gomez, took medication so that her body did not reject the new organ.

I had a stomach virus last week, and my body rejected anything I tried to eat.

As a noun, a reject is something that cannot be used or sold because something might be wrong with it. It can also mean something that is not wanted. Like the noun of "refuse," the first syllable is stressed.

My sister gives me rejects of old clothes when she no longer wears them.

Both "refuse" and "reject" can mean not to accept something, but their uses can be very different.

Please let us know if these examples and explanations have helped you, Jego.

syllable — n. a part a word is naturally divided into when pronounced

recycling – adj. having to do with the processing of paper, glass, cans, etc. in order to regain or reuse materials