Expert: Regular Booster Vaccines Are the Future with COVID-19

Update Required To play the media you will need to either update your browser to a recent version or update your Flash plugin.
By Susan Shand
18 March 2021

Sharon Peacock is the head of COVID-19 Genomics UK, COG-UK. She said countries must work together in their fight against the virus.

"We were always going to have to have booster doses; immunity to coronavirus doesn't last forever," Peacock told Reuters.

She added that scientists were already changing the vaccine to fight virus variants as they are found.

Peacock, a professor at Britain's Cambridge University, said she was sure that regular booster shots would be needed to deal with future variants. However, she said that the booster doses could be developed and given to people over time.

Peacock set up COG-UK exactly a year ago with the help of the British government's chief scientific adviser, Patrick Vallance. The group is made up of public health experts and scientists from several British universities. It now holds more information about the virus's genetics than anywhere else in the world. At places across Britain, COG-UK scientists have sequenced over 349,000 genomes of the virus out of a worldwide effort of about 778,000 genomes. 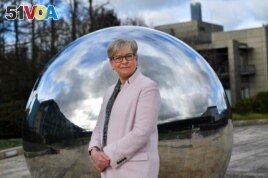 There are three main coronavirus variants, which were first identified: Britain, known as B.1.1.7; Brazil, known as P1; and South Africa, known as B.1.351.

Peacock said she is most worried about the South Africa variant. Not only does it spread more easily, but it also has a change in a gene mutation that can lower immunity. That gene mutation is known as E484K.

With 120 million cases of COVID-19 around the world, it is getting hard to keep track of all the different variants and names. So, Peacock's teams are thinking in terms of "constellations of mutations," she said. "Constellation" in this case means a group of people or things that are similar in some way.

She explained that scientists are thinking "about what mutations or constellation of mutations are going to be important biologically and different combinations that may have slightly different biological effects."

Peacock added that she and other experts have had to accept they will be wrong about some of their COVID-19 predictions.

"One of the things that the virus has taught me is that I can be wrong quite regularly - I have to be quite humble in the face of the virus that we know very little about still," she said.

"There may be a variant out there that we haven't even discovered yet."

The coronavirus has killed 2.65 million people worldwide since it began in late 2019.

There will be other pandemics in the future. Peacock hopes that scientists will take what they have learned from the coronavirus and be better prepared for the next worldwide health crisis.

The Reuters News Agency reported this story. Susan Shand adapted it for Learning English. Ashley Thompson was the editor.

regular – adj. happening over and over again at the same time or in the same way

immunity – n. the power to keep yourself from being affected by a disease

dose – n. the amount of medication to be taken at one time

sequence – v. a group of things that come one after the other

humble – adj. not thinking of yourself as better than others