Update Required To play the media you will need to either update your browser to a recent version or update your Flash plugin.
By Ashley Thompson
23 September, 2016


Sometimes a visit to a national park means hiking rugged trails and climbing high mountains. Other times it means crawling through caves or rafting down a wild river.

But this week we want to take it easier. So we head south to the state of Arkansas. It is home to a national park that is perfect for resting and renewing a tired body. Visitors treat themselves to one of its natural thermal baths. Humans have been enjoying the warm waters for thousands of years.

Most national parks are far from cities and industry. But Hot Springs is different. It covers more than 2,200 hectares in and around the city of Hot Springs, Arkansas. Congress approved special protection of the area in 1832. Known unofficially as "America's Spa," it became a national park in 1921.

The park's geothermal springs and other resources have long been used for therapeutic bathing. The average temperature of the hot springs is 61 degrees Celsius. The thermal mineral waters reportedly help ease many health problems, including arthritis and rheumatism.

The springs emerge along the western edge of Hot Springs Mountain. Scientists say the hot springs are made of rainwater that fell in the Hot Springs area thousands of years ago. The rainwater slowly dripped down to the earth's crust. When water rises back up to the surface quickly, and does not have a chance to cool, hot springs form.

Hot Springs National Park's earliest bathhouses were simple structures. They were made of canvas and lumber. They were built right over some of the natural springs. Later, businessmen built more complex wooden structures. But, those structures were frequently damaged by fires and from exposure to water and steam.

Beginning in the early 1900s, stone, stucco and brick structures replaced the wooden bathhouse buildings. These large -- and much more elaborate -- structures still stand today along what is known as Bathhouse Row. 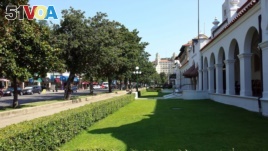 A view of Bathhouse Row (Photo by Brandonrush)

These bathhouses were built along the eastern bank of Hot Springs Creek. The hot water from the hillside springs flows down a system of wooden troughs and into the buildings.

Each spring was said to help cure different kinds of conditions. Some of the early names referred to their chemical properties. Others were named after the part of the body that its waters could best help. There once was a spring called Kidney, and another named Liver.

Eight bathhouse buildings line Bathhouse Row today. They are very large. Many of them are three levels. But most of them no longer offer therapeutic water treatments. Instead, they house park shops and the visitor's center.

But one has remained open for more than 100 years. The Buckstaff Bathhouse has operated continuously since 1912. It is one of the best preserved bathhouses within Hot Springs National Park. Visitors today can enjoy traditional thermal mineral baths. The baths are different temperatures and have different properties.

Another bathhouse offers a more modern spa experience. Quapaw Baths and Spa also sits along Bathhouse Row. It was renovated and reopened in 2007, on Hot Springs' 175th anniversary.

When you are done with your relaxing bath, there is still more to enjoy at Hot Springs National Park. Visitors can hike along the more than 43 kilometers of trails in the park. You will find unusual rock formations and views of the surrounding rolling hills.

The landscape also provides evidence of the area's hot spring history. On the Tufa Terrace Trail, you will see the huge deposits of tufa, created by the flowing springs over thousands of years. Tufa is a kind of rock shaped by water.

But you do not have to hike to see the sights. There are beautiful mountain roads to drive, as well. However you explore Hot Springs National Park, you can't help but relax.

Ashley Thompson wrote this report with materials from the National Park Service. Caty Weaver was the editor.

emerge - v. to rise or appear from a hidden or unknown place or condition

lumber - n. wooden boards or logs that have been sawed and cut for use

exposure - n. the fact or condition of being affected by something or experiencing something

elaborate - adj. made or done with great care or with much detail