Update Required To play the media you will need to either update your browser to a recent version or update your Flash plugin.
By Faith Pirlo
20 January 2023


Hello! This week on Ask a Teacher, we will answer a question about the difference between "release" and "relief." 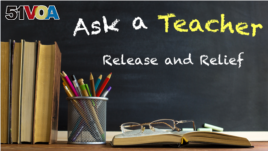 I am Renna. I am glad you saw my email. I want to ask the difference between "release" and "relief."

Thank you so much,

These words are often mistaken because they sound similar.

Both words come from Latin and old French before making their way into the English language. They have completely different meanings and parts of speech. Let's begin by looking at "release."

The word "release" can be either a verb or a noun. As a verb it can take a direct object. "Release" has several meanings.

The first meaning is to free or let go, especially if limited in some way.

The kidnappers released their hostages when the negotiations ended.

"Release" as verb can also mean to express, especially feelings or ability.

Sarah released many emotions during therapy.

The acting class will help release my inner artist.

Lastly, "release" can mean to make available or to publicize.

As a noun, a "release" is the action or process of being released.

The activists postponed the fish release when the river level dropped.

"Relief" as a noun is the easing of pain, difficulty or lack.

The only relief for her headache was to lie still in a dark room.

It is such a relief to know you're back home safely.

The government opened roads so relief, including medicine, could get through to the disaster site.

And lastly, "relief" means a person who takes on the responsibility of others to provide support.

As a relief employee, Pat works at all the local hospitals filling in when a nurse takes leave.

One important note about the word "relief." "Relief" as a verb is "relieve," which can sometimes be confused as "release." The meanings of "relieve" are connected to those of "relief," but just in the verb or action form.

For example, to "relieve" means to cause something to be less such as pain or stress.

A visit to the steam room relieved her back pain.

"Relieve" can also mean to free someone of a job, duties, a burden, or responsibility, like the relief nurse.

A relief nurse takes over or relieves another nurse of their work.

This meaning of "relieve" is most closely related to "release" as "to make available."

He carried my bags for me, which relieved me.

Please let us know if these explanations and examples have helped you, Renna.

net-zero –n. a situation in which nothing is gained and nothing is lost

emissions –n. (often pl.) something that is released, such as a gas or gasses, from a process

steam – n. water vapor kept under pressure so as to supply energy for heating, cooking, or mechanical work : – v. to apply steam to