Update Required To play the media you will need to either update your browser to a recent version or update your Flash plugin.
By Kelly Jean Kelly
01 November, 2014


Nuclear weapons. AIDS. Environmental destruction. American researchers say what you fear depends a lot on where you live. But this year, researchers found that people everywhere believe religious and ethnic hatred is increasingly becoming the world's most serious threat.

Jacob Poushter works for the Pew Research Center in Washington, DC. He was involved in the Center's study, which was released in October. He said researchers asked people in 44 countries to choose which of five dangers is the top threat to the world.

"We found that Middle Easterners tended to identify religious and ethnic hatred as the top global threat, while Europeans and to some extent Americans said that inequality was the top danger."

Mr. Poushter said that, in general, Africans saw AIDS and other infectious diseases as the number one threat. People in Asia and Latin America worried most about pollution and the environment. Mr. Poushter added that researchers carried out the survey before Islamic State militants seized much of Iraq and Syria, and before Ebola became a major international news story.

The Pew Research Center last investigated the public's fears in 2007. Since then, more people around the world — and especially in the Middle East — named religious and ethnic hatred as the world's biggest danger.

But some international relations experts warned that the expression "religious and ethnic hatred" may be misleading. 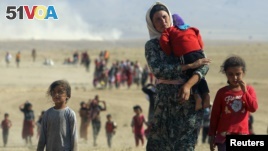 Displaced people from the minority Yazidi sect, fleeing violence from forces loyal to the Islamic State in Sinjar town, walk towards the Syrian border.

Jocelyne Cesari is with the Berkeley Center for Religion, Peace and World Affairs at Georgetown University in Washington, DC. She recently wrote a book called Awakening of Muslim Democracy.

Ms. Cesari said Middle Eastern governments, such as in Iraq or Syria, often use one religious or ethnic group to control the whole population.

"People are very aware of that. If you don't belong to the right group, you may be in trouble."

Ms. Cesari compared current religious and ethnic tensions in the Middle East to conflicts between Catholics and Protestants in Ireland in the late 20th century.

"We have now knowledge that it was not about belief, it was something about being part of the same nation on an equal footing."

Ms. Cesari said that, to improve the situation, Middle Eastern governments must represent all religious and ethnic communities fairly.

"I think hatred has become the kind of, the go-to category for thinking about popular emotion in conflicted societies."

Mr. Ross studied ethnic-related conflict in Rwanda and the former Yugoslavia. He said international observers there identified the presence of intense hatred. But when researchers spoke to people one-on-one, the subjects did not often describe feelings of hatred. Instead, Mr. Ross found, they talked about a number of feelings, including jealousy, pride and hopelessness.

He noted that a major study could speak only very generally about people's complex feelings and experiences. But he said that Pew's findings suggest our fears are more similar than different.

For instance, he said, inequality is a common concern. In some countries inequality may relate to religious and ethnic groups. In others, it can relate to race, class or immigration status.

* Kelly Jean Kelly reported and wrote this story. George Grow was the editor.

to some extent – phrase, partly but not completely true

What do you think is the biggest threat facing the world? Comment in one or two sentences, and we will respond to your use of vocabulary and grammar.