Update Required To play the media you will need to either update your browser to a recent version or update your Flash plugin.
By Gregory Stachel
21 August 2021


The Bible Belt is often used to describe an area of the United States, mainly in the South, where people are deeply religious. As a result, religious leaders could help or hurt the campaign to vaccinate people in areas affected by high infection rates from the fast-spreading Delta variant of the coronavirus.

Some clergies are holding vaccination centers and praying for more shots. Others are against the vaccine or not talking about it at all.

Recently, the First Baptist Church of Trussville in the state of Alabama had an outbreak following its 200th-anniversary celebration. The church's leader promised more cleaning and face coverings. But he did not say the two words that health officials believe could make a difference: "Get vaccinated."

Dr. Danny Avula is the head of Virginia's COVID-19 vaccination effort. He suspected he might have a problem getting religious leaders to publicly support the shots. Members of his church called them "the mark of the beast." It is a saying to describe loyalty to the devil in the church's teaching. 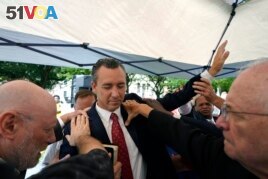 FILE - In this June 7, 2021 file photo, Tony Spell, pastor of the Life Tabernacle Church of Central City, La., prays with supporters outside the Fifth Circuit Court of Appeals in New Orleans.

A few religious leaders have gained crowds or media attention for their opposition to the vaccines, like Tony Spell. He repeatedly ignored COVID-19 restrictions to hold in-person church services in Baton Rouge, Louisiana. He told followers vaccines are like the devil and urged them not to follow the government's "evil orders."

Curtis Chang is a church leader who also teaches at Duke University. He said most clergies stay silent on the vaccine issue to avoid tensions in religious communities already struggling with the pandemic and political division.

The National Association of Evangelicals, a group of Christian leaders, found that 95 percent of its members plan to get vaccinated. But Chang said many leaders have not spoken in support of vaccination.

This matters because vaccination rates are generally low across the Bible Belt where many church-goers resist appeals from government leaders and health officials.

In the state of Missouri, more than 200 church leaders signed a statement urging Christians to get vaccinated as cases exploded last month. They noted the church's teaching to "love your neighbor as yourself." The mayor of Springfield, Missouri said the area saw a big jump in vaccinations after the leader of a large church told followers that it was the right thing to do.

Dr. Ellen Eaton is an infectious disease specialist at the University of Alabama at Birmingham. She said churches could be effective at supporting vaccination as a way "to love your neighbors during this pandemic."

"Next to their personal physician, many here in Alabama routinely turn to their church leaders with health issues," she said.

Jay Reeves reported this story for The Associated Press. Gregory Stachel adapted it for VOA Learning English. Hai Do was the editor.

church – n. building that is used for Christian religious service

beast – n. a wild animal that is large, dangerous, or unusual

devil – n. the most powerful spirit of evil in Christianity, Judaism, and Islam who is often represented as the ruler of hell

routinely – adv. as part of a regular procedure rather than for a special reason