Update Required To play the media you will need to either update your browser to a recent version or update your Flash plugin.
By Christopher Jones-Cruise
30 May, 2017

Noriega had been in a coma since March. He had been recovering from several operations related to removing cancer from his brain earlier this year.

Noriega ruled Panama from 1983 to 1989. His time in power is remembered as a time of corruption and violence in the Central American country. 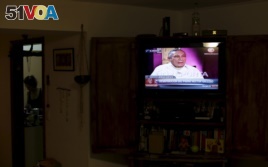 Panama's former dictator Manuel Noriega is seen on a television screen in Panama City June 24, 2015. Noriega offered an apology to the country after 25 years in jail during an exclusive interview with a local news channel.

Before and during his rule, Noriega received millions of dollars in payments from the Central Intelligence Agency (CIA). In exchange, he provided intelligence to the U.S. government. He reported on events in Panama and the rest of Latin America.

At the time, a number of rebel groups operated in the area. Noriega informed the CIA about guerilla and terrorist activities.

The United States used his information to seize illegal drugs at sea and follow the secret movement of money in and out of Panama's banks.

But his relations with the U.S. government worsened after a political opponent was killed in 1985. In addition, Noriega appeared to begin working with the drug traffickers.

Members of Panama's military attempted to overthrow him but failed. The leaders of the attempted rebellion were arrested and executed without being tried.

During the operation, 23 American troops were killed. More than 300 others were wounded. The U.S. military estimates 200 Panamanian civilians died and 314 soldiers were killed.

After Noriega's capture, he was brought to the United States to face legal action. He was tried and jailed for 17 years after being found guilty on drug trafficking charges. In 2007, Noriega was sent to France, where he was jailed on money-laundering charges. He was returned to Panama in 2011 and imprisoned.

After Noriega was ousted, economic conditions in Panama seemed to improve. The United States gave the Panamanian government control of the Panama Canal in 1999. Panama expanded the waterway. The number of foreigners visiting the country has increased and property values have risen.

But the country of 3.9 million people still suffers from the corruption that worsened during Noriega's rule. And drug traffickers and money launderers still operate there.

Varela said Noreiga's wife and three daughters have a right to bury him in peace.

coma – n. a state in which a sick or injured person is unconscious for a long time

traffic – v. to buy or sell something especially illegally

launder – v. to put (money that you got by doing something illegal) into a business or bank account in order to hide where it really came from