Update Required To play the media you will need to either update your browser to a recent version or update your Flash plugin.
By Caty Weaver
31 August, 2016


This week, the United States lost a beloved actor and funnyman. Gene Wilder, the wild-haired star of unforgettable comedy films, died Monday at the age of 83.

A family member said Wilder was diagnosed with Alzheimer's disease three years ago. He said the actor kept the condition private so he would not disappoint fans.

"He simply couldn't bear the idea of one less smile in the world,'' his nephew Jordan Walker-Pearlman said.

Gene Wilder started his acting career on the stage. However, millions of people knew him from his work in film. His movies with director Mel Brooks were especially famous. They included "The Producers,'' "Blazing Saddles'' and "Young Frankenstein.''

'Truly great talent of our time'

In a statement Monday, Brooks wrote, "Gene Wilder, one of the truly great talents of our time, is gone. He blessed every film we did together with his special magic and he blessed my life with his friendship. He will be so missed.''

Wilder was a master at playing nervous characters trapped in impossible, but funny, situations. In 1974's "Young Frankenstein,'' Wilder's character sought to build a living person from the dead.

Wilder played Leo Bloom in the 1968 film "The Producers,'' about a man who tries to produce a costly failure on Broadway. The play, "Springtime for Hitler," becomes a surprising hit instead.

Wilder could play cool-headed characters like the gunslinger in "Blazing Saddles.''

He also made millions of child fans with his portrayal as the main character in "Willy Wonka and the Chocolate Factory.''

'But I don't think I'm that funny'

Many have posted messages on social media about the loss of Gene Wilder.

Comedian and actor Jim Carrey posted, "Gene Wilder was one of the funniest and sweetest energies ever to take a human form.''

Wilder was close friends with Richard Pryor. Their opposite personas - Wilder the worrier and the easy-going Pryor - were perfect for making comedy. They starred in four films together: "Silver Streak,'' "Stir Crazy,'' "See No Evil, Hear No Evil'' and "Another You.''

They created several memorable scenes, such as when Pryor provided Wilder with directions on how to "act black'' as they tried to avoid police in "Silver Streak.''

However, Wilder said in a 2013 interview that he was no comedian. He told interviewer Robert Osborne it was the biggest misunderstanding of him. 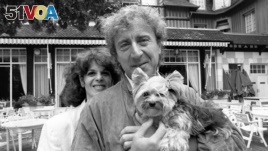 Wilder was born Jerome Silberman on June 11, 1933. His father was a Russian emigre. His mother was of Polish descent.

When he was six, Wilder's mother suffered a heart attack that left her disabled. He soon began performing comedy at home to entertain her. He started taking acting classes at age 12. In 1961, he made his Broadway debut. That is when he took on the professional name of Gene Wilder.

Wilder was married three times. His second marriage, to Saturday Night Live performer Gilda Radner, ended when she died of ovarian cancer in 1989.

Wilder spent much of his time after her death speaking in support of cancer research. He also opened a support center for cancer patients. In 1991, he spoke before Congress about the need for increased testing for cancer.

Wilder is survived by his wife, Karen, whom he married in 1991, and his daughter Katherine from an earlier marriage.

The Associated Press news agency reported this story. Caty Weaver adapted it for VOA Learning English. was the editor.

persona – n. the way you behave, talk, etc., with other people that causes them to see you as a particular kind of person: the image or personality that a person presents to other people

entertain – v. to perform for (an audience): to provide amusement for (someone) by singing, acting, etc.

debut – n. the first time an actor, musician, athlete, etc., does something in public or for the public