Update Required To play the media you will need to either update your browser to a recent version or update your Flash plugin.
By Caty Weaver
02 December 2022


British rock and roll musician Christine McVie died Wednesday at the age of 79.

McVie wrote many hit songs, played the keyboard and sang as a member of the group Fleetwood Mac.

Her death was announced on the band's social media accounts. 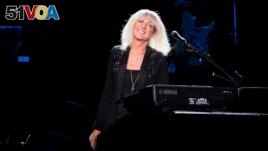 FILE - Christine McVie from the band Fleetwood Mac performs at Madison Square Garden in New York on Oct. 6, 2014. McVie, the soulful British musician who sang lead on many of Fleetwood Mac's biggest hits, has died at 79. (Photo by Charles Sykes/Invision/AP, File)

No cause of death or other details were immediately provided. A family statement said she "passed away peacefully at hospital" with family around her after a short sickness.

"A few hours ago I was told that my best friend in the whole world since the first day of 1975, had passed away," bandmate Stevie Nicks said in a handwritten note posted to Instagram.

McVie was a steady presence in a group that saw many membership changes since it formed in the late 1960s. Fleetwood Mac started out as a London blues band and developed into one of the defining makers of 1970s California pop-rock. From 1975 to 1980, the band sold tens of millions of records.

Christine McVie was seen as a peacemaker.

"I was supposedly like the Mother Teresa who would hang out with everybody or just try and (keep) everything nice and cool and relaxed," she told Rolling Stone earlier this year. "But they were great people; they were great friends."

Fleetwood Mac was inducted into the Rock and Roll Hall of Fame in 1998. At the ceremony they played McVie's song, Say You Love Me.

McVie wrote or cowrote many of the band's most popular songs. Don't Stop, a piece inspired by the end of her marriage, gained surprising political meaning in 1992. An American presidential candidate chose the song and its repeated phrase "Don't stop thinking about tomorrow" to represent his 1992 campaign.

McVie was born Christine Anne Perfect in the British town of Bouth, Lancashire. She came from a musical family. Her father was a violinist and music teacher and her grandfather played organ at Westminster Abbey.

McVie's two marriages, to John McVie and Eduardo Quintela, both ended in divorce. She was also involved with the Beach Boys' Dennis Wilson for several years. She wrote the song Only Over You about him.

Stevie Nicks and Christine McVie formed a lasting friendship. They agreed that, as two of the rare women in rock and roll, they would always stand up for each other.

Mick Fleetwood and John McVie were there at the founding of Fleetwood Mac and were the only ones to remain all the way through.

Christine McVie left the group in the 1990s, when she was seemingly done forever with the rock star life.

"I moved to Kent, and I loved being able to walk around the streets, nobody knowing who I was," she said of her musical break during an interview this year with the Guardian.

"Then of course I started to miss it. I called Mick and asked: ‘How would you feel about me coming back to the band?'" she said. "He got in touch with everybody and we had a band meeting over the phone and they all went: ‘Come baaaack!!' McVie said, "I felt regenerated and I felt like writing again."

induct -v. to admit as a member

inspire -v. to create desire or interest for something

interview -n. a meeting at which information is obtained (as by a reporter, television commentator, or pollster) from a person