Update Required To play the media you will need to either update your browser to a recent version or update your Flash plugin.
By VOA
14 August, 2015


World War II ended 70 years ago this week. On August 15, 1945, Japan surrendered to allied forces led by the United States. The war was, and remains, the deadliest military conflict in history.

The allies fought many costly battles against Japan. The bloodiest and most deadly was the Battle of Okinawa. U.S. officials said the battle was one reason they decided to use atomic weapons on Japan. They said the human cost of fighting was too high.

VOA recently visited the island of Okinawa to learn more about the effects of the war there. 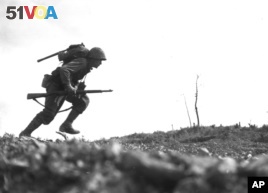 The invasion of Okinawa was the last, the bloodiest, and one of the largest battles of World War II. More than 1,000 American ships and hundreds of thousands of troops were involved. The fighting lasted 82 days. Villages were destroyed and forests burned. Almost 200,000 people were killed.

A small museum on a U.S. Marine base in Okinawa shows pictures and historical objects from the battle. Mark Waycaster is the curator of the museum's Battle of Okinawa area. He says Japanese General Mitsuru Ushijima's plan was to hurt the morale and strength of the Americans. His goal was not to win.

"His intentions is to bleed the American forces so bad that the United States sues for peace."

Many American and Japanese troops were killed or injured in Okinawa. Japanese forces fought fiercely. Some fought to the death, refusing to surrender even when they knew they could not win. This was one reason U.S. officials gave for their decision to drop atomic bombs on the city of Nagasaki and Hiroshima.

Today on Okinawa, many Japanese still remember the battle. The fighting caused the deaths of almost one-third of the civilians who lived on the island. Some Japanese military areas are preserved as memorials.

The Himeyuri Peace Museum tells the story of about 200 Japanese schoolgirls. They were forced to work as medical aides for the Japanese military. Many died in the fighting.

Shimabukuro Yoshiko was seriously injured during the fighting. She said Japanese officials warned the girls that the Americans would rape and then kill them. She says she was told American soldiers were devils. But she said an American soldier saved her life.

She says "I saw the soldier's face and he looked nice and said 'I'm going to help you.'"

Many people remember or learned about the deaths and damage resulting from the war. Many Okinawans are pacifists, and they gather often to speak against violence.

They are unhappy about the presence of American troops on Okinawa. And they oppose efforts by conservatives in Japan to strengthen the country's military.

curator – n. a keeper or caretaker for a museum collection

sue for peace – v. formal to officially ask for an end to fighting

preserve(d) – v. to keep safe from loss or harm

pacifist – n. someone who believes that war and violence are wrong and who refuses to take part in or support a war effort

Were parts of your country affected by World War II? We want to hear from you. Write your thoughts in the comments section.