Update Required To play the media you will need to either update your browser to a recent version or update your Flash plugin.
By Jonathan Evans
06 October, 2017

Petty died on Monday after suffering a cardiac arrest at his home in Malibu, California. He was 66 years old.

Petty's family said he was taken to a hospital early Monday, but doctors could not help him. They said he died several hours later "surrounded by family, his bandmates and friends."

Petty and his band finished their most recent tour just last week at the Hollywood Bowl in Los Angeles. 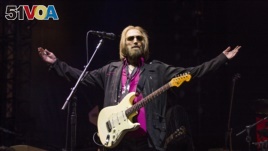 Tom Petty of Tom Petty and the Heartbreakers seen at KAABOO 2017 at the Del Mar Racetrack and Fairgrounds on Sunday, Sept. 17, 2017, in San Diego, Calif. (Photo by Amy Harris/Invision/AP)

In December, Petty told Rolling Stone magazine that he thought this would be the group's last performances together. He said, "It's very likely we'll keep playing, but will we take on 50 shows in one tour? I don't think so. I'd be lying if I didn't say I was thinking this might be the last big one."

Singer-songwriter Bob Dylan was a friend of Petty's. They performed together over 20 years ago in a group called the Traveling Wilburys.

In a statement to Rolling Stone magazine, Dylan said Petty's death was "shocking, crushing news." The rock star added "He was a great performer, full of the light, a friend, and I'll never forget him."

Petty was born on October 20, 1950 in Florida. The New York Times newspaper reported that he had a difficult childhood and did not do well in school.

Petty said he first wanted to become a rock and roll star after meeting Elvis Presley while Presley was in Florida filming a movie called "Follow That Dream."

Petty rose to fame in the 1970s with his band Tom Petty and the Heartbreakers. They were known for hits such as "American Girl," "Listen to Her Heart" and "You Got Lucky."

The group became members of the Rock and Roll Hall of Fame in 2002.

But alongside his success, Petty suffered from depression and turned to drugs. A 2015 biography told about his addiction to the drug heroin in the 1990s.

Warren Zanes wrote the book "Petty: The Biography." Zanes told The Washington Post that Petty "had had encounters with people who did heroin, and he hit a point in his life when he did not know what to do with the pain he was feeling."

Petty once told CNN, "Music, as far as I have seen in the world so far, is the only real magic that I know. There is something really honest and clean and pure and it touches you in your heart."

Jonathan Evans wrote this story for VOA Learning English based on reports from Reuters and VOANews.com. George Grow was the editor.

encounter – n. an occasion when you deal with or experience something

tour – n. a series of related performances, appearances, competitions, etc., that occur at different places over a period of time