Update Required To play the media you will need to either update your browser to a recent version or update your Flash plugin.
By Dan Novak
23 July 2022


A recent study says illegal loggers have destroyed about 18,500 square kilometers of public forests over the past six years in the Brazilian Amazon rainforest. But, the study says, the nation's Federal Police do not investigate the loss enough.

The wood cutting took place in state and federal forests that are "unallocated." That means they are neither part of a national park nor are they considered native territories. Official data says the Brazilian Amazon has about 580,000 square kilometers of unallocated forest. That is an area almost the size of Ukraine.

The public forests have become a target for criminals who illegally seize land. 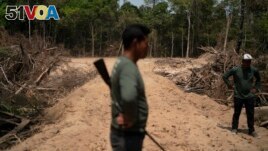 Igarapé Institute, a Brazilian policy research group, released the study. The group researched 369 environmental crime operations carried out by the Federal Police in the Amazon between 2016 and 2021. Only two percent targeted people illegally seizing unallocated public lands. It also found that the Federal Police created only seven operations to investigate this large loss.

The Federal Police did not answer The Associated Press's request for comment about its work in the Amazon.

The report said the lack of enforcement likely comes from the weak legal protection of these areas. Environmentalists have long pressed the federal government to turn unallocated public forests into protected areas.

Brazil returned to democratic rule in 1985 after 20 years of military rule. Most of the democratic governments have expanded protected forests. Today about 47 percent of the Amazon is protected land, official data says. But President Jair Bolsonaro has said the country has too many protected areas and has slowed adding new protected land.

In 2016, about 2,240 square kilometers of unallocated public land were illegally harvested for wood. Last year, that area reportedly almost doubled. Over six years, the total amount of land with illegal harvesting activity reached 18,500 square kilometers. That information comes from the Amazon Environmental Research Institute which is linked to the World Bank.

Deforestation is increasingly taking place on unallocated lands. In 2016, unallocated land made up 31 percent of all illegally cut forest. Last year, the amount reached 36 percent.

The Brazilian nonprofit group Climate Observatory said that almost half of Brazil's climate pollution comes from deforestation. The group said there is so much destruction that the eastern Amazon has, on average, stopped absorbing carbon gasses from the Earth's atmosphere. Instead, a study published in 2021 in the journal Nature suggests it is now turning into a source of carbon gasses. Carbon gasses are blamed for trapping heat in the Earth's atmosphere.

The enforcement operations were spread over 846 places. Nearly half were in protected areas, like the Yanomami Indigenous Territory. The area has a heavier police presence but has still been invaded by thousands of illegal gold miners.

The Igarapé study also pointed to a large "ecosystem of crime," as the police operations took place in 24 of Brazil's 27 states including eight cities in neighboring countries.

"Environmental crime stems from illicit economies that access consumer markets and financing outside the Amazon," the report said.

logger –n. a person who cuts down trees for the wood industry

absorb — v. to take something in (such as a liquid or gas) in a natural slow way

ecosystem —n. everything that exists in an environment

access —n. the ability to get or get into something