Update Required To play the media you will need to either update your browser to a recent version or update your Flash plugin.
By Bryan Lynn
17 December 2021


American singer Bruce Springsteen has reportedly sold his full music collection and publishing rights to Sony Music in a deal estimated to be worth $500 million.

Music industry magazine Billboard reported the deal. The publication based its story on information provided by unnamed individuals who spoke about the deal. The agreement has not been publicly announced. Representatives for Sony Music did not comment on the report. 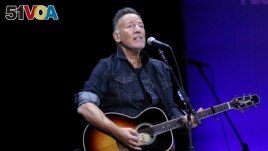 In this file photo, Bruce Springsteen performs at the 13th annual Stand Up For Heroes benefit concert in support of the Bob Woodruff Foundation in New York on Nov. 4, 2019. (Photo by Greg Allen/Invision/AP, File)

Other music stars have also sold the rights to their work in recent years, including Tina Turner, David Bowie, Bob Dylan and Stevie Nicks.

But The Associated Press reports Springsteen's deal would be the largest so far. It includes 300 songs from more than 20 albums. Among them is one of the biggest sellers in history: 1984's Born in the U.S.A.

Warner Music bought worldwide rights to Bowie's music in September. Last year, Dylan sold his music collection of more than 600 songs to Universal Music Group in a deal estimated to be worth $300 million.

The 72-year-old Springsteen has been with Sony's Columbia Records throughout his career, during which he has sold more than 150 million records.

The singer-songwriter has won 20 Grammy Awards, two Golden Globes and an Academy Award for Best Song for Streets of Philadelphia in 1993.

Springsteen was awarded the Presidential Medal of Freedom in 2016 by President Barack Obama. He has also been accepted into the Rock and Roll Hall of Fame and the Songwriters Hall of Fame.

Billboard, The Associated Press, Reuters and Agence France-Presse reported on this story. Bryan Lynn adapted the reports for VOA Learning English. Caty Weaver was the editor.