Update Required To play the media you will need to either update your browser to a recent version or update your Flash plugin.
By Dan Novak
17 May 2022


Many Christian organizations operated boarding schools for Native American children from the 19th to the early 20th centuries.

They were part of a project to remove Native culture, identity and land. And a new report from the U.S. Interior Department shows how closely the U.S. government was involved.

The Federal Indian Boarding School Initiative Investigation Report was started following the discoveries of hundreds of possible graves at former boarding schools in neighboring Canada. The report centers on the U.S. government's responsibility for its own officials' actions and policies. 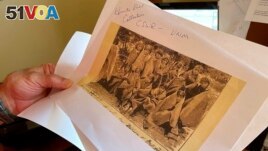 The report also details how the government provided money and other support to religious boarding schools for Native children. The financial support would have normally been banned under rules on the separation between church and state. But the churches, the report says, also influenced the government and suggested people for appointments to federal positions on Native affairs.

The work between the church and the state is well known to experts in the field and has been the subject of past research. But the latest report brings it to a wider audience that has begun to learn about the boarding schools.

The Interior Department report, stating a 1969 Senate investigation, says that "federal policy toward the Indian was based on the desire to dispossess him of his land. Education policy was a function of our land policy."

An important part of that was training Native Americans in jobs that were less dependent on the land and separated them from tribal ties.

Another was turning native people to Christianity. An 1886 Commissioner for Indian Affairs document attacked Native spiritual traditions and said the government should provide help to missionaries.

Last week's report also says the government provided the schools with money that was to be paid to the tribes for their land. The report notes a 1908 Supreme Court ruling that the ban on spending federal money on religious schools "did not apply to Indian treaty funds."

The report identifies 408 boarding schools for Native children in 37 states and former territories. They were operated or supported by the government between 1819 and 1969. The report does not say how many were church-run. But an earlier report by the National Native American Boarding School Healing Coalition found that more than 150 were. Catholic and Protestant groups operated about half each.

Last week, 76-year-old Matthew War Bonnet testified before U.S. lawmakers about his childhood experience at the schools in South Dakota.

Bradley Hauff, a clergy with the Episcopal Church, is a member of the Oglala Sioux Tribe. He said church groups must deal with their history of working with the government on these policies.

"As much as we in the church might not want to acknowledge that, it is the truth...," he said.

At its General Convention in July, the Episcopal Church plans to vote on an investigation into its work with the schools. The church will also acknowledge its responsibility for causing emotional pain to generations of Native Americans.

In April, Pope Francis apologized at the Vatican to Indigenous groups from Canada for the conduct of members of the Catholic Church that operated the schools. He plans to apologize again in Canada in July.

boarding school — n. a school where students can live during the school term

church — n. the institution of the Christian religion

function— n. something that results from something else

missionary — n. a person who is sent to a foreign country to do religious work

apply — v. to use in a particular situation

fund — n. an amount of money that is used for a special purpose

accountable — adj. required to be responsible for something

acknowledge — v. to say that you accept or do not deny the truth or existence of