Update Required To play the media you will need to either update your browser to a recent version or update your Flash plugin.
By Ashley Thompson
04 April, 2019


The pilots of Ethiopian Airlines Flight 302 followed all of Boeing's recommended steps when their plane began to nose dive shortly after takeoff. But they still could not stop the plane from crashing. Those are the early findings from a report released Thursday by the Ethiopian government.

The Boeing 737 Max 8 jet crashed on March 10 just six minutes after taking off from Addis Ababa. All 157 passengers and crew members died.

The Ethiopian government said it based its report on flight data and cockpit voice recordings.

The plane's builder, Boeing, said it could not comment until it studies the full report. The company's 737 Max 8 jet has been criticized since a Lion Air flight crashed off the coast of Indonesia last October. That crash and the Ethiopian Airlines crash have several similarities, aviation experts say. 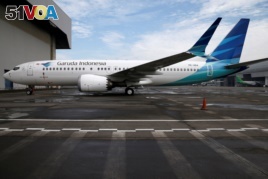 A Boeing 737 Max 8 airplane at Soekarno-Hatta International airport near Jakarta, Indonesia, March 13, 2019. All 737 Max 8s have been grounded worldwide.

At the center of the crash investigation is the plane's flight-control system. Boeing and U.S. officials have said that pilots could regain control in emergencies if they followed a series of steps. Those steps include turning off a system designed to prevent the plane from crashing. This anti-stall system is known as MCAS. It was designed especially for the Max model.

Ethiopian investigators did not name the MCAS system in their report. But they recommended that Boeing examine "the aircraft flight control system related to the flight controllability." They also recommended that aviation officials confirm that issues have been fully addressed before permitting Max planes to fly again.

Boeing's 737 Max planes are currently not permitted to fly anywhere in the world. Boeing is working to fix the model's anti-stall system. The change must be approved by the U.S. Federal Aviation Administration (FAA) and other regulators.

The FAA said Monday that it expects Boeing's final software improvements for 737 Max airliners "in the coming weeks."

The report did not say whether Ethiopian officials were seeking only those software improvements or whether they want a larger update to the Max's flight controls.

It is also not clear whether the Ethiopian pilots followed all of Boeing's recommendations fully. The pilots followed Boeing's instructions to disconnect the MCAS system. But for a still-unknown reason, the pilots then seemed to turn the system on again. That information comes from an official familiar with the investigation, who spoke with The Associated Press on Wednesday. The official spoke on the condition of remaining unidentified because Ethiopia's report had not yet been released.

Boeing's emergency instructions advise pilots to turn off the MCAS system and to continue flying manually for the rest of the flight.

Ethiopian investigators did not talk about that issue at their press conference Thursday. They said the pilots had done what they were supposed to do.

The Ethiopian officials did not say whether the MCAS system might have turned on again because of a broken sensor. One of the sensors, called Angle of Attack, did not work correctly in the Lion Air crash, which turned that plane's MCAS system on again.

David Hasse is an aviation expert and editor of the online publication airliners.de. He said it is important that the report found the Ethiopian pilots followed the correct steps provided by Boeing. That finding links the case more closely to the Lion Air crash.

Hasse said, "What is special about this case is that two crashes seem to have a very, very similar reason. This is something that is very rare in aviation."

Hasse said he questions whether all Boeing 737 Max planes should have been grounded after the Lion Air crash.

The Associated Press reported on this story. Ashley Thompson adapted it for VOA Learning English. Mario Ritter Jr. was the editor.

nose-dive –n. to drop suddenly with the front end pointing toward the ground

cockpit –n. are in an airplane where a pilot sits

aviation –n. related to flying vehicles such as airplanes and helicopters

stall –v. to stop flying suddenly because of a loss of lift

manually –adv. operated by a person, not automatic