Update Required To play the media you will need to either update your browser to a recent version or update your Flash plugin.
By Dan Novak
08 February 2022


How to keep students learning during school closures and other disruptions has been one of the most difficult questions of the pandemic. April 2020 data from the United Nations Educational, Scientific, and Cultural Organization (UNESCO) found that at least 1.1 billion students in 114 countries were affected by the pandemic and school closures.

But inequality among families, schools, and countries means that some students were better prepared to succeed during the disruptions than others.

A new study looks at the teaching and learning methods used in 11 countries during the pandemic. The study was carried out by the International Association of Educational Achievement (IEA) and UNESCO. 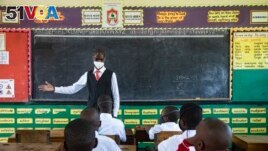 A teacher welcomes back students during a classroom lesson on day one of re-opening schools in Kampala, Uganda, Jan. 10, 2022.

The survey included more than 1,500 school leaders, 15,000 teachers and 21,000 students. The large survey received responses from four countries in Africa, three countries in Europe, two in Asia and one in South America and the Middle East. They were a mix of developed and developing countries.

When schools closed, countries' teaching and learning methods differed greatly around the world. Some countries were able to quickly move to online learning. But others were simply not able to make that change.

Overall, 10 percent of students said they did not have the resources to complete their schoolwork, at least most of the time.

Countries that did not have digital resources had other ways to reach students outside the classroom. Educational television and radio broadcasts increased in some places, including Rwanda, Kenya and Russia.

But when schools closed, many students went through long periods of time without any schooling at all. Most students in Burkina Faso, about half of students in Ethiopia, and about one-fifth of students in Kenya did not do any schoolwork for at least four months.

Dirk Hastedt is the executive director of IEA, one of the organizations that led the study. He said that in all countries, there was concern for the most poor and vulnerable students. Poorer students and students already struggling were the ones who suffered the most during school disruptions. Many could not access digital resources. Many students' families suffered financially from the pandemic, which likely affected their schooling. Some had to spend time caring for family members.

In Kenya, for example, 63 percent of students said one of their parents lost their job during the pandemic. And in Ethiopia, almost half of students reported that they had to care for brothers and sisters at home. That likely left them with less time for schoolwork.

Hastedt said policymakers need to find a way to reach the students hurting the most.

"The task for the future... is how can we get these students up to speed again so we don't lose them completely and they fall behind even more," Hastedt said.

The pandemic has also brought attention to student and teacher mental health. A majority of students in eight countries surveyed said their emotional well-being suffered during the pandemic.

Teachers also felt the emotional effects of the pandemic. In India, for example, 85 percent of teachers said they needed additional mental health support. In Russia, 64 percent of teachers reported feeling tired most of the time. And a majority of teachers in several of the countries were afraid of being infected with COVID while working.

Many countries are listening to what teachers and students say they need. In most countries surveyed, 50 percent of schools increased support for students and teachers. Many school leaders reported an increase in the use of school guidance counselors and other mental health resources during the pandemic. Teachers also provided more help to students with their emotional and physical health.

Hastedt said the study shows how schools are more than just places for learning.

"We saw that schools have a role beyond teaching and learning," Hastedt said. "It's also a matter of the people's wellbeing. It's a structure in their life."

disrupt — v. to cause (something) to be unable to continue in the normal way

response — n. something that is said or written as a reply to something

laptop — n. a small computer that is designed to be easily carried

advantage — n. something that helps to make someone or something better or more likely to succeed than others

role — n. the part that someone has in a family, society, or other group