Update Required To play the media you will need to either update your browser to a recent version or update your Flash plugin.
By Bryan Lynn
31 August 2022

Facebook's parent company, Meta, and Twitter said the accounts were removed because they violated their terms of service. The investigators who examined the activity say the campaigns used "deceptive" methods to push "pro-Western narratives in the Middle East and Central Asia."

A series of secret campaigns were likely carried out over a five-year period, a report from California's Stanford University and the social media data company Graphika found. 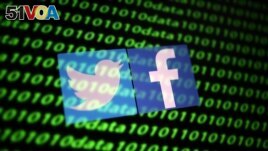 Twitter and Facebook shared their data about the accounts with the researchers. But they have not publicly identified what groups or organizations were behind the campaigns.

Twitter said the evidence it gathered pointed to the United States and Britain as the likely origin of the activity. Meta identified the U.S. as being the country of origin for material appearing on Facebook and Instagram, the report said.

Who is behind the campaigns?

VOA asked the U.S. Department of Defense whether the military had created the false accounts. In answer, the Pentagon's press secretary, Air Force Brigadier General Pat Ryder, said officials would need to look at the data provided by Facebook and Twitter. He added that the U.S. military does carry out "military information support operations around the world."

Ryder said he could not speak about ongoing operations or specific department methods. But he did say that any military activities "operate within prescribed policies."

The report said the false accounts sometimes linked to articles from Voice of America and its sister organization, Radio Free Europe/Radio Liberty. False media sites that were created also copied stories from BBC Russia, VOA and other sources.

Several suspended social media accounts were linked to false media accounts operating in Persian, such as Dariche News. That news site claimed to be an independent media company and also provided some original content. But, the report added, "many of their articles were explicit reposts from U.S.-funded Persian-language media, including Radio Free Europe/Radio Liberty's Radio Farda and VOA Farsi."

The parent government organization for VOA and RFE/RL is the United States Agency for Global Media (USAGM). A spokesperson for the agency, Lesley Jackson, told VOA in an emailed statement that it did not have knowledge of the false accounts.

She said that USAGM only operates its own official social media accounts and websites. In doing so, the agency uses "the highest standards to ensure that official accounts are fact-based, accessible and verifiable," Jackson said.

Jackson confirmed that USAGM does not work with other U.S. government agencies or other groups to push news content through false social media accounts.

Similar to other influence campaigns

The methods used in the influence campaigns were similar to those used in campaigns involving other countries. These included using false photos to create accounts and using hashtags and calls to action to build support.

One set of accounts in Central Asia mainly centered on Russia's military activities in the Middle East and Africa. But in February, it moved to the war in Ukraine, "presenting the conflict as a threat to people in Central Asia," the report said.

The researchers noted the campaign methods used did not really work to increase user involvement. Most of the posts and tweets received only a handful of likes or retweets. And a majority of the accounts had fewer than 1,000 followers.

deceptive – adj. intended to make someone believe something that is not true

narrative – n. a story or description of events

origin – n. where something comes from in the beginning

prescribe – v. to say officially what people must do

standard – n. a level of quality, especially one that is acceptable

verifiable – adj. able to be proven