Report: Google Still Tracks You Even with Location History Off

Update Required To play the media you will need to either update your browser to a recent version or update your Flash plugin.
By Bryan Lynn
15 August, 2018


Many Android and iPhone owners use Google services on their mobile devices. Some of these services use GPS technology to collect information about the places people go.

One of the most widely used location services is Google Maps. When someone uses Google Maps, information about times and locations are recorded and stored.

Google also uses tracking tools with other services. Weather apps, for example, are designed to identify a user's location to provide local weather information. Even some Google internet searches can result in the collection of information about exactly where a person was when the search was made.

Google says it collects the data to improve localized experiences for its users. But such practices have also raised privacy concerns. Privacy activists have called on Google and other major technology companies to make it easier for users to turn off location services if they do not want to be tracked.

An investigation by the Associated Press, or AP, suggests this process is not as easy as it might seem. The investigation found that Google continues to collect location information even on users who have changed their privacy settings.

The AP says the results of its investigation were confirmed by computer science researchers at Princeton University in the American state of New Jersey.

Google's influence in the mobile device industry is far-reaching. About two billion people worldwide use Google-developed Android devices. In addition, hundreds of millions of iPhone owners use Google for maps or for making searches. 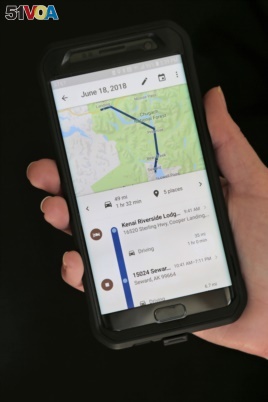 But the AP investigation found this does not appear to be true. It found that Google continued to save location history even if a user had turned off Location History. Turning off Location History only stopped Google from creating a timeline of locations the user had visited.

One of the tests the AP carried out involved Princeton privacy researcher Gunes Acar. The news agency was able to track his movements and identify visited locations – including his home – over several days in the New York City area.

Acar was carrying an Android phone with Location History turned off.

Jonathan Mayer is a Princeton computer scientist and former technologist with the Federal Communications Commission. He disagrees with Google's methods for storing location data, which he says can be unclear for users.

"If you're going to allow users to turn off something called ‘Location History,' then all the places where you maintain location history should be turned off," Mayer said. "That seems like a pretty straightforward position to have."

In answer to a request for comment from the AP, Google said it uses several location tracking tools.

"There are a number of different ways that Google may use location to improve people's experience, including: Location History, Web and App Activity, and through device-level Location Services," the company said in a statement.

Google says users can stop the saving of all location markers by turning off another setting. That setting, however, is not clearly identified as being connected to location tracking. The setting is called "Web and App Activity." It is activated on new devices. The tool stores different kinds of information from Google apps and websites to a user's Google account.

How to prevent further tracking

The easiest way to block further location tracking on any device is to go to the website myactivity.google.com, which permits users to change Google account settings. On the upper left drop-down list, go to "Activity Controls." Turn off both "Web & App Activity" and "Location History." This should prevent exact location markers from being stored to your Google account.

Detailed directions on how to turn off these tools for iOS and Android operating systems can be found here.

Bryan Lynn wrote this story for VOA Learning English, based on a report from the Associated Press and other sources. Ashley Thompson was the editor.

GPS – n. abbreviation for Global Positioning System: a system of computers and satellites used to identify where users are

tracking – n. the recording of locations or progress of a person or thing

app – n. computer program designed to do a specific task or set of related or connected tasks

access – n. way of being able to use or get something

account – n. an arrangement in which a person uses internet or service of a particular company

maintain – v. keep something going in a consistent way

straightforward – adj. easy to do or understand