Report: India to Surpass China as Most Populous Country in 2023

Update Required To play the media you will need to either update your browser to a recent version or update your Flash plugin.
By Jonathan Evans
12 July 2022


A new United Nations report says that India will pass China as the world's most populous country in 2023.

India's population was 1.21 billion in 2011. That number is from India's official population count, or census. The census is carried out once every 10 years. The government delayed the 2021 census because of the coronavirus pandemic. 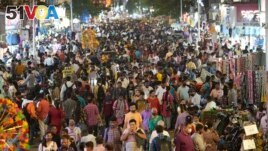 The world's population was growing at its slowest rate since 1950 and fell below 1 percent in 2020, UN estimates showed.

UN Secretary-General António Guterres said in a statement, "This is an occasion to celebrate our diversity...and marvel at advancements in health that have extended lifespans and dramatically reduced maternal and child mortality rates."

Guterres noted that a growing population was a reminder of a shared responsibility of care for the planet. He added that we should "reflect on where we still fall short of our commitments to one another."

The UN report said worldwide life expectancy at birth fell to 71 years in 2021. That is down from 72.8 years in 2019, mostly because of deaths related to the coronavirus pandemic.

The United Nations said more than half of the expected increase in worldwide population through 2050 will be centered in eight countries. Those countries are India, Congo, Egypt, Ethiopia, Nigeria, Pakistan, Tanzania and the Philippines.

The population of 61 countries is expected to decrease by 1 percent or more between 2022 and 2050 because of a decrease in fertility levels.

fertility – n. the birth rate of a population

diversity – n. the condition or fact of being different

dramatically – adv. done in a sudden or extreme way

maternal – adj. of or relating to a mother

reflect – v. to think seriously and carefully about