Update Required To play the media you will need to either update your browser to a recent version or update your Flash plugin.
By Gregory Stachel
25 May 2021


Latin America is to receive millions of U.S.-made COVID-19 vaccine injections in the coming weeks.

The news comes as the United States is becoming the top exporter of vaccines against the new coronavirus.

Reuters news agency spoke with two people who know about the issue. However, Reuters did not identify the individuals.

The U.S. is planning give 80 million vaccines to other countries. One of the Reuters sources said the United States is considering giving high importance to providing vaccines to North and South America.

The second source said the drug company Pfizer has begun exporting millions of its U.S.-made shots largely to countries in Central and South America. 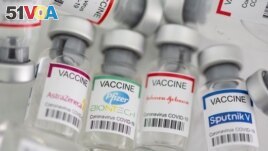 Many Latin American countries need COVID-19 vaccines as they fight rising infections. Brazil has been one of the countries hardest hit by the pandemic. Brazilian officials have reported more than 16 million cases and 449,000 deaths.

The second source said Pfizer is producing 10 million shots in the U.S. each week for export. The U.S. is now making more vaccines than are needed for use in the country.

The source said Pfizer is making shipments from its Kalamazoo, Michigan factory to Canada, Mexico and nearly 10 other Latin American countries.

The administration of President Joe Biden is still considering how to direct the vaccines it promised to other countries. Biden has not yet decided on a plan.

The United States is competing with China and Russia. Those countries have been carrying out so-called "vaccine diplomacy." That means they are trying to gain influence by providing other countries with vaccines.

Mitt Romney is a Republican Party Senator. Last week, he said the U.S. needs to speed up vaccine sharing to better compete with world rivals.

Gayle Smith leads COVID-19 efforts at the U.S. State Department. She said last week that the U.S. will donate a large number of vaccines through the COVAX program. This program is supported by the World Health Organization and gives vaccines mainly to poorer countries.

The second source said Pfizer is sending its U.S.-made vaccines to Latin America for two reasons. It is close to their manufacturing centers and it meets their goal of getting shots to poorer countries.

Reuters reported earlier that a deal with the U.S. government barred Pfizer from exporting vaccines until after March 31. Pfizer is continuing to hold talks with India where its shots are not yet approved. The second person said the timeline for a possible agreement is not clear.

The U.S. is becoming a top supplier of COVID-19 shots to the world as the vaccination effort in the United States nears its goal.

U.S. government information shows that more than 60 percent of U.S. adults received at least one COVID-19 vaccine injection. At the same time, countries like India and Brazil are struggling to get the vaccines they need to control their severe outbreaks.

Reuters information shows that Brazil has vaccinated about 13 percent of its population. It is currently recording an average of about 65,000 new cases each day.

Last week, Biden said the U.S. will give out 20 million shots that had been meant for U.S. persons by the end of June. The medicines will include vaccines made by Pfizer, Moderna and Johnson & Johnson.

The Biden administration is also planning to give other countries around 60 million U.S.-made injections of AstraZeneca's vaccine. It is not yet approved for use in the U.S.

Carl O'Donnell and Jeff Mason reported this story for Reuters. Gregory Stachel adapted it for VOA Learning English. Mario Ritter was the editor.

source –n. a person, book or other thing, that gives information

geography – n. an area of study that deals with the Earth, its countries, cities, rivers, mountains, lakes and other features