Update Required To play the media you will need to either update your browser to a recent version or update your Flash plugin.
By Mario Ritter Jr.
11 June, 2019


Media reports say the half-brother of North Korea's leader was working with a United States intelligence agency. Kim Jong Nam was killed in Malaysia in 2017.

The Wall Street Journal reported Monday on the claim. The newspaper said that an unnamed "person knowledgeable about the matter" had provided information about the case.

Other news agencies have not been able to confirm the story. The Central Intelligence Agency has declined to comment on the issue.

Officials at South Korea's National Intelligence Service and the Unification Ministry, which oversees ties with North Korea, also said they could not confirm the report.

The Wall Street Journal report says officials believe Kim Jong Nam had likely been in contact with security services of other countries. However, Kim Jong Nam probably did not know about the country's "inner workings," the newspaper quotes one former unnamed official as saying. Kim Jong Nam had remained outside of North Korea for a long time.

Reuters news agency reports that Kim Jong Nam's possible activities for U.S. intelligence are noted in a new book about North Korea's leader, Kim Jong Un. The book, "The Great Successor," was written by Washington Post reporter Anna Fifield. It is being released this week.

Fifield says in her book that Kim Jong Nam met with intelligence agents in Singapore and Malaysia.

South Korean and U.S. officials have said that North Korean officials ordered the killing of Kim Jong Nam after he criticized the country's family-ruled leadership. North Korea has denied this. 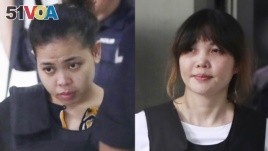 In February of 2017, two women smeared a substance on the face of Kim Jong Nam while he was in Kuala Lumpur International Airport. Investigators said the substance that the women used contained VX nerve agent, a banned chemical weapon. He died soon afterwards.

Malaysian officials arrested the two women, Vietnamese Doan Thi Huong and Indonesian Siti Aisyah, shortly after the incident. Government lawyers charged the two with murder. Those charges were reduced, however, and both were released earlier this year.

Mario Ritter Jr. adapted this story from Reuters and AP for VOA Learning English. Kelly Jean Kelly was the editor.

smear –v. to spread a substance on a surface or on skin