Update Required To play the media you will need to either update your browser to a recent version or update your Flash plugin.
By Susan Shand
10 February 2021


A secret United Nations report says North Korea has used attacks over the internet to steal hundreds of millions of dollars. The money was then used to pay for the country's nuclear program and to improve its ability to develop ballistic missiles. The attacks are a violation of international law.

The report was released to reporters Tuesday. It says North Korea was able to increase its nuclear and missile programs in 2020. North Korea remains under many international sanctions.

One unnamed official from a U.N. country said in the report that North Korea paid for its military expansion with over $300 million stolen through cyberhacks and internet fraud. 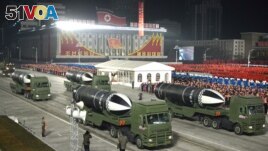 Military equipments are seen during a military parade to commemorate the 8th Congress of the Workers' Party in Pyongyang, North Korea January 14, 2021 in this photo supplied by North Korea's Central News Agency (KCNA).

The report points to new ballistic missiles that have been shown in recent military parades. It also says those missiles could be large enough to carry nuclear weapons and could possibly reach the United States.

North Korea announced in January that it had developed what it claimed to be "the world's most powerful weapon." That weapon is a submarine-launched ballistic missile. However, the weapon has yet to be tested. Little else is known.

The show of military strength is partly because of the change of administration in the United States, said Sojin Lim. She is a Korea expert at Britain's University of Central Lancashire.

Lim told VOA that the nuclear program is seen by Kim as the only way for North Korea to survive.

"Recently, because of the COVID-19 situation, their economic situation has become even worse. And especially with the new administration in the (United) States, the new President (Joe) Biden, North Korea has no way to discuss or negotiate with America," she said.

Lim argued that sanctions on North Korea have not worked.

"Sanctions give more hardship for civilians, but its own aims or purpose, which is the change in policy of the country, has not been working in that way," she said. She added that the international community needs to find a new way to deal with North Korea.

Former U.S. President Donald Trump met North Korean leader Kim Jong Un three times in 2018 and 2019. The meetings failed to get North Korea to give up its nuclear weapons.

The Biden administration is working on a new policy for North Korea, U.S. National Security Adviser Jake Sullivan told reporters on February 4. He said the effort "is under way."

Most experts, however, see little hope of any progress toward denuclearization on the Korean Peninsula.

sanctions – n. measures taken against a country to cause it to observe international law

cyber –adj. related to computers or things that take place over the internet

hack –v. to secretly get into computer files or a network in order to take information or cause damage

fraud – n. a crime of using dishonest methods to take something valuable from another person or people