Update Required To play the media you will need to either update your browser to a recent version or update your Flash plugin.
By Bryan Lynn
01 June 2022


A new report suggests many online education systems gathered private information on children as they studied at home during the COVID-19 pandemic.

The report was released by the international rights group Human Rights Watch (HRW). The organization says it examined 164 education technology, or EdTech, products used in 49 countries.

Of the 164 EdTech systems studied, HRW said 89 percent appeared to be involved in activities that "risked or infringed on children's rights." 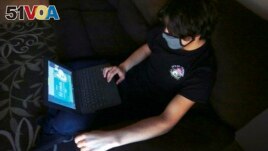 Javin Lujan Lopez, 17, a senior at at Pojoaque High School logs into a remote learning site on his laptop, at his home in Espanola, N.M., Feb. 22, 2021. (AP Photo/Cedar Attanasio)

Such products had the ability to follow children's online activities, in most cases secretly, "and without the consent of children or their parents," HRW's report found.

HRW said most of the online learning products it examined either sent or provided access to advertising technology companies.

"In doing so, some EdTech products targeted children with behavioral advertising," the report said. This kind of advertising can target individuals with personalized content and advertisements that follow them across the internet.

HRW said that with the exception of Morocco, all governments studied in the report "endorsed" at least one EdTech product "that risked or undermined children's rights."

The group said its investigators began examining the educational products in 2021. At the time, schoolchildren across the world were using EdTech products at home because pandemic-related restrictions prevented in-classroom learning.

The report states that data gathering "took place in virtual classrooms and educational settings where children could not reasonably object" to the collection methods.

The report noted that it was "not possible" for HRW to reach a "definitive" judgement about the companies' aims in the data collection effort. The investigators said their reporting was based only "on what it observed in the data and the companies' and governments' own statements."

Human Rights Watch said it shared its findings with EdTech companies, advertising companies and governments covered in the report. It said several technology companies denied collecting data from children, while others said their products were not designed for children's use. Some advertising businesses denied knowledge that data on children was being sent to them.

Some EdTech companies also questioned HRW's research methods. ST Math is an American-based online learning system. It said in an explanation of its privacy policies that HRW examined the wrong website for its report.

ST Math said its main website that HRW looked at is designed for marketing purposes. It noted that investigators should have examined its other web-based system, which is designed for students and teachers. The company said that system does not have tools to collect data and follow user activity.

Reporters from major media organizations in 16 countries assisted in the investigation. In its reporting, The Washington Post said some user data from online learners was shared with major advertising-based companies including Facebook and Google.

A Google spokesperson told the Post the company is investigating the report's claims. The company said it is prepared to take action if it finds any of Google's data privacy rules were violated. A spokesman for Facebook's parent company, Meta, told the newspaper it restricts how businesses share children's data and also limits how advertisers can target children and teens.

HRW's report calls on governments to "pass and enforce modern child data protection laws that provide safeguards around the collection, processing and use of children's data." It also urges companies to stop these collection methods.

Albert Fox Cahn directs the New York-based Surveillance Technology Oversight Project. He reacted to the report on Twitter. "We already knew technologies were being abused and putting kids at risk," he tweeted. "But this report is important because it shows the scale of harm and how the same mistake is being made by educators and governments around the world."

Bryan Lynn wrote this story for VOA Learning English based on a report from Human Rights Watch.

endorse – v. to declare publicly that you support a person or action

undermine – v. to make someone less confident or make something weaker

definitive – adj. clear, sure and not likely to change