Report Predicts Rise in US Sea Levels Within 30 Years

Update Required To play the media you will need to either update your browser to a recent version or update your Flash plugin.
By Gregory Stachel
20 February 2022


A new government report says sea levels on the U.S. coast line are expected to rise by at least .25 meters in the next 30 years.

The National Oceanic and Atmospheric Administration (NOAA) and six other federal agencies created the report.

It predicts that the sea level along the U.S. coast will be 0.25 to 0.3 meters higher by 2050. The report warns of more floods from storms and high water levels on the coast even on sunny days during high tides. 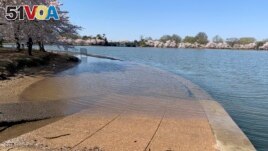 FILE - Part of the sidewalk near the Jefferson Memorial is covered in water during high tide at the Tidal Basin in Washington, DC on April 3, 2019. (AP Photo/Ashraf Khalil, File)

LeBoeuf warned that the cost will be high. She said the United States coasts are home to a lot of economic activity and 40 percent of the U.S. population.

William Sweet was the report's lead writer. He said that the largest sea level rise from melting of ice in Antarctica and Greenland probably will not start until after 2100.

Sea levels can rise more in some places than others because land can sink. Also, currents and water from melting ice are different from place to place. The report predicts sea levels in the U.S. will rise more than the world average.

Sweet said the greatest rise in the U.S. will be on the Gulf of Mexico and East Coast. The West Coast and Hawaii will be below the average.

The report predicts 0.6 meters of sea level rise in St. Petersburg, Florida, a city on the Gulf of Mexico. But the study predicts just 0.36 meters in Los Angeles, California.

Cities like Miami Beach, Florida; Annapolis, Maryland; and Norfolk, Virginia already get a few minor floods every year during high tides. The researchers said those will be replaced by several "moderate" floods by about 2050. Those floods will cause property damage.

"It's going to be areas that haven't been flooding that are starting to flood," Sweet said. He added, "Many of our major metropolitan areas on the East Coast are going to be increasingly at risk."

The report said the western coast of the Gulf of Mexico should have the biggest sea level rise by 2050. The researchers predict a sea level rise of 0.4 to 0.45 meters.

The report is estimating an average of about 0.6 meters of sea level rise in the United States as a whole by 2100.

high tide – n. a time when water levels are highest in some coastal areas of the world because of the influence and position of the sun and moon

metropolitan – adj. of or relating to a large city and the surrounding cities and towns