Update Required To play the media you will need to either update your browser to a recent version or update your Flash plugin.
By Dan Novak
16 July 2022


A research organization based in Geneva, Switzerland warns that rising prices are likely to affect women more than men.

The World Economic Forum released a report Wednesday on the economic conditions of women and men around the world.

The group warns that inflation could increase the difference, what is called the gap, between men and women in the world's labor force. 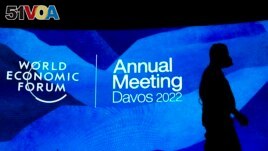 Workers set the stage prior to the annual meeting of the World Economic Forum, in Davos, Switzerland, Sunday, May 22, 2022.

The World Economic Forum is best known for holding a yearly gathering of famous business, cultural and political leaders in the Swiss town of Davos. For the past 16 years, the group has written the Global Gender Gap Report that aims to measure gender equality around the world.

The group said there were hopes that the gender gap would begin to become smaller as the COVID-19 health crisis eased. Now, economic shocks threaten to make the gap worse, it said.

The forum estimates that it will take 132 years for the world to reach gender equality. That is down from the 136 years estimated in last year's report.

The group studied 146 countries, rating each one in the four areas of gender quality. It rated Iceland as the most gender-equal country in the world, followed by Finland, Norway and New Zealand. Rwanda, Nicaragua and Namibia were also highly ranked. Germany, Europe's biggest economy, came in 10th place. Further down the list were the world's biggest economies. The United States was 27th, China was 102nd and Japan was 116th, last among G7 major industrialized nations.

Saadia Zahidi is a top official with the World Economic Forum. She said women have been disproportionately affected by the crisis caused by inflation. Women were especially hurt by job losses during the pandemic and a lack of, what she called, "care infrastructure" — such as care services for old people or children, Zahidi said.

"In face of a weak recovery, government and business must make two sets of efforts: targeted policies to support women's return to the workforce and women's talent development in the industries of the future," she said.

"Otherwise, we risk eroding the gains of the last decades permanently and losing out on the future economic returns of diversity," Zahidi said.

Dan Novak adapted this story for VOA Learning English based on a report by The Associated Press.

gender — n. the state of having female and male sexes

opportunity — n. a chance or situation in which something can be done

disproportionately — adv. showing a difference this either not fair, not reasoned or unexpected

talent — n. a special ability that allows someone to do something well

diversity — n. the quality or state of having many different forms, kinds or examples of something