Update Required To play the media you will need to either update your browser to a recent version or update your Flash plugin.
By Caty Weaver
20 April, 2016


A media rights group says leaders have developed "paranoia" about reporters as the world is entering a "climate of fear."

Christophe Deloire is secretary-general of the Paris-based Reporters Without Borders. On Wednesday, he said "Numerous authorities are trying to regain control of their countries, fearing overly open public debate."

He added new technologies permit leaders to appeal directly to the public. As a result, he said "there is a greater degree of violence against those who represent independent information."

The report says the problems are especially serious in Latin America. It notes structural violence in Venezuela and Ecuador, organized crime in Honduras and a lack of punishment in Colombia.

Reporters Without Borders also says corruption in Brazil damages media freedom as does too few separate independent media in Argentina.

The report rates 180 countries. Eritrea is rated the worst country for media freedom worldwide. Just above it on the list are North Korea, Turkmenistan, Syria and China. 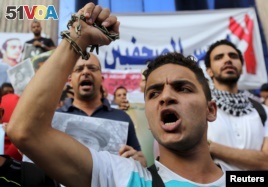 Journalists and members of the April 6 movement protest against the restriction of press freedom and demand the release of detained journalists in front of the Press Syndicate in Cairo, June 10, 2015.

Finland is the top of the list for the sixth year straight. The Netherlands and Norway come in second and third.

Reporters Without Borders places the United States at number 41 on the list. The report says computer spying is a major problem in the country.

Individual countries that improved the most in the 2016 report include Tunisia. Last year it was number 96. The new report says a decrease in violence and legal action in Tunisia brought it to number 30. Ukraine also rose to number 22 from 107 because conflict has eased in the eastern part of the country.

Countries that fell the most include Tajikistan and Brunei. Both rated more than thirty positions lower than last year. Poland also fell from 29 to 47 on the list.

The report blames the drops to a rise in the repressive nature of some governments, such as those in Tajikistan, Egypt and Turkey. It also says more dangerous security situations in Libya, Yemen and Burundi have affected media freedoms in those countries. The report also blamed increasingly strong religious laws about speech, such as in Brunei, and tighter government control of state-owned media, such as in Poland.

Reporters Without Borders says the obstacles to press freedom lead to self-censorship. The report also criticizes governments that are quick to suspend Internet availability to their citizens. It says the act damages media freedom.

The report says every continent has seen a decrease in media freedom over the past three years. Europe still has the freest media. Africa comes next, followed by the Americas, Asia and Eastern Europe-Central Asia. The report says North Africa and the Middle East remain the areas where reporters are most restricted in all ways.

The index measures signs of media independence, self-censorship, the rule of law, transparency and the safety of reporters.

Reporters Without Borders sends questionnaires in 20 languages to experts around the world as part of the study data. It also examines reports of abuses and acts of violence against reporters.

The Associated Press reported this story. Caty Weaver adapted it for Learning English. ­­­­Hai Do was the editor.

Let us know what you think. Write to us in the Comments Section or on 51VOA.COM.

paranoia – n. an unreasonable feeling that people are trying to harm you, do not like you, etc.

authorities – n. people who have power to make decisions and enforce rules and laws

censorship – n. the system or practice of censoring, or restricting, information in books, movies, letters, etc.

questionnaire – n. a written set of questions that are given to people in order to collect facts or opinions about something