Update Required To play the media you will need to either update your browser to a recent version or update your Flash plugin.
By Dorian Jones
18 October, 2015


A new study of public opinion in Turkey shows deep divisions in how the Turkish people view their country and the world around them. This study comes as Turkey heads towards a parliamentary election on November 1.

The survey reports on two major issues: distrust of major powers outside of Turkey and fear for Turkey's economy in the future.

The Pew Research Center is an independent organization that studies social trends around the world. The center collected the opinions of the Turkish people as part of its Spring 2015 Global Attitudes survey. This survey gathered opinions between March and May 2015. 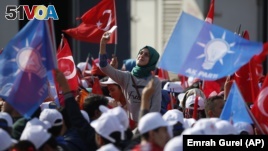 Supporters listen to Turkey's Prime Minister and leader of the ruling Justice and Development Party, Ahmet Davutoglu, as he addresses a rally before the Nov. 1 general elections, in Bursa, Turkey.

The results of the survey show that Turkish people have negative opinions of many foreign powers. Fifty-eight percent see the U.S. negatively and 64 percent see Russia the same way. Forty-nine percent see the European Union negatively. But, 55 percent still want Turkey to become a member of the EU.

Turkey is a member of NATO. However, 47 percent say that Turkey should not use military force to defend a NATO ally if Russia attacked the ally. In addition, only 38 percent support the U.S.-led effort to fight the Islamic State in Syria and Iraq.

Another important issue covered was the future of Turkey's economy. Fifty-two percent of Turks believe their children will face poor financial situations when they grow up. People also listed rising prices and lack of job opportunities among their top concerns.

Cenzig Aktar is political scientist with Suleyman Sah University in Istanbul. He says this will cause big problems for President Recep Tayyip Erdogan and his political party, AKP.

"When we recall that the AKP has got its past successes thanks to the state of the economy, this tells us quite a bit about the disappointment of the voters. So this is very worrisome for the AKP, I'm afraid."

The AKP lost its majority control of the Turkish parliament after an election on June 7. AKP and opposition groups have since failed to work together. As a result, President Erdogan called for new elections on November 1.

However, these elections may not be good for the president's party. Fifty-one percent of Turks have a negative opinion of him. Forty-nine percent are unhappy with how the current government is working as well.

Dorian Jones reported and wrote this story for VOA news. Pete Musto adapted it for Learning English. Jill Robbins was the editor.

disappointment – n. the state or feeling of being unhappy because something is not as good as expected

worrisome – adj. causing people to think about problems or fears

Now it's your turn. How do people in your country feel about your current government? How do people feel about the future of the economy? Let us know in the comments section below or on 51VOA.COM.