Update Required To play the media you will need to either update your browser to a recent version or update your Flash plugin.
By VOA
22 March 2022


A new study has found that people living in South and Central Asia experience some of the highest levels of air pollution in the world.

The air in these areas has the highest amounts of the most kind of air pollution. PM2.5 is atmospheric particulate matter that is 2.5 microns in diameter or less. A micron is one millionth of a meter. PM2.5 is so small that it can enter human lungs and the blood. 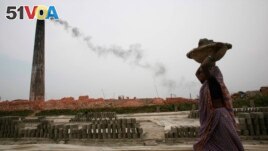 FILE: Smoke emits from chimney as a Bangladeshi female worker carries clay at a brick field at Amin Bazar, outskirts of Dhaka, Bangladesh, Thursday, May 14, 2009.

Based on data from IQAir's worldwide network, Bangladesh is the country with the highest levels of PM2.5 air pollution. Chad, Pakistan, Tajikistan and India are also among the five nations with the lowest air quality.

IQAir found that New Delhi, India, is the capital city with the most PM2.5 pollution. Dhaka, Bangladesh; N'Djamena, Chad; Dushanbe, Tajikistan; and Muscat, Oman, are the other capital cities rated as having extremely polluted air.

People seeking the world's cleanest air will find it in the French overseas territory of New Caledonia. The territory's main city, Noumea, is at the top of IQAir's clean air ranking.

Other places where the air is very clean include the U.S. Virgin Islands and Puerto Rico in the Caribbean. Cape Verde, in the Atlantic Ocean off the coast of Africa, also has very little air pollution.

Some parts of the developing world lack enough monitoring, Dolphin Hammes said. Those areas include parts of Africa, the Middle East and South America. Developed countries usually have a greater number of air quality monitors than developing countries and areas.

Monitoring is at a higher level than in past years in some countries, she said. With that additional monitoring, Dolphin Hammes noted, "there are two countries (Chad and Tajikistan) that are among the most polluted countries that weren't on our report last year."

Scientists supported the new recommendations. But they worry that some countries would have trouble reaching them. Much of the world was already failing to meet the 10-microgram limit, Reuters news agency reported.

IQAir's yearly reports are based on PM2.5 measurements from what is now a total of 6,475 cities in 117 countries, regions and territories. The worldwide information comes from "tens of thousands of regulatory and low-cost air quality monitoring stations," the company said. The stations are operated by governments, nonprofit organizations, research centers and citizen scientists.

diameter –n. the distance through the center of something from one side to the other

monitor –v. to watch, observe, listen to, or check (something) for a special purpose over a period of time

region –n. a part of a country or of the world, that is different or separate from other parts in some way

regulatory –adj. making or concerned with making official rules about what is acceptable in a particular business, activity or field