Update Required To play the media you will need to either update your browser to a recent version or update your Flash plugin.
By Bryan Lynn
10 July, 2019


The World Economic Forum, or WEF recently published its list of top emerging technologies for 2019.

Each year, the not-for-profit group's experts create a report listing the technologies they believe will become influential in the next five years. The technologies also are chosen because they could help society and economies and are expected to gain the attention of researchers and investors.

At the top of the list is a group of materials known as bioplastics. Bioplastics are made from natural substances that make them biodegradable. This makes bioplastics very different from most plastics in use today, which come from petroleum products.

The widespread use of petrochemical plastics across the world is flooding landfills and causing severe damage to the world's oceans. The WEF's report notes that the use of biodegradable plastics in the future could greatly reduce this environmental harm.

There has been progress in recent years in the development of new materials to replace petroleum-based plastics. One material being developed is cellulose, a very strong material found in plant cell walls. Another substance, lignin, can be used to add strength. 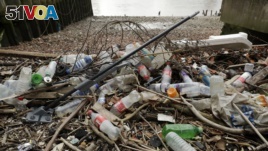 In this photo taken on Tuesday, April 23, 2019, plastic bottles and other garbage float in the river Drina near Visegrad, eastern Bosnia-Herzegovina. (AP Photo/Eldar Emric)

When used together, these two materials can produce bioplastics with similar strength and long-lasting qualities to petroleum-based plastics, the WEF experts reported. The report added that these substances could easily be found without having to use resources also needed to produce food.

The experts taking part in the report agreed that there is still a lot of work to be done before bioplastics can be widely used. For example, the process could cost a lot of money and require large amounts of land and water.

However, the experts agreed that in the future, such emerging methods and biodegradable materials could go a long way to help fuel what they call a "circular economy." A circular economy is an economic system that aims to limit waste while making the most of existing resources.

Next on the WEF's list are "social robots." The organization says these machines are designed to assist and engage with humans while attempting to make an emotional connection.

Such robots are powered by machine learning methods and artificial intelligence. They use cameras and sensors to recognize human faces and activities. This could include a person's speech, body movements and emotions.

Over time, these social robots are supposed to be able to develop their own form of social and emotional intelligence.

The robots are designed to learn about the subjects they assist to provide information, comfort and other forms of help. As they become more developed, these social machines could take over some of the responsibilities currently met by human workers.

The WEF reported that worldwide sales of robots designed to help people reached an estimated $5.6 billion in 2018. But the WEF predicts the market will expand to $19 billion by the end of 2025, with more than 65 million robots sold each year.

Also making the WEF's 2019 list of emerging technologies – at number three - was a growing group of very small lenses. For many years it has not been possible to produce extremely tiny lenses. But the WEF report says engineers recently discovered methods to create smaller, lighter versions known as metalenses.

The experts believe these lenses could permit the shrinking of microscopes and other widely used laboratory tools. They could also be used to improve the performance of cameras, virtual reality equipment and industrial sensors.

Bryan Lynn wrote this story for VOA Learning English, based on a report from the World Economic Forum. Mario Ritter Jr. was the editor.

biodegradable – adj. capable of being slowly destroyed and broken down into very small parts by natural processes, bacteria, etc.

landfill – n. a place where waste is buried in the ground

engage – v. cause someone to become interested or involved in an activity

artificial intelligence – n. the ability of a machine to use and analyze data in an attempt to reproduce human behavior