Report: US Set Twice as Many Heat Records as Cold in Last 20 Years

Update Required To play the media you will need to either update your browser to a recent version or update your Flash plugin.
By Bryan Lynn
24 March, 2019


A new examination of temperatures in the United States shows that there were two times more heat records set in the past 20 years than cold ones.

The Associated Press analyzed temperature information collected by 424 weather stations across the country.

The analysis included temperature information from 1920 to 2008. It found that, most decades during the 20th century had close to an even ratio of hot to cold records.

But since 1999, 87 percent of the weather stations had more hot records than cold. And, 42 stations reported having at least five hot records for every cold one since 1999. At 11 stations, the hot-to-cold ratio during the period was 10-to-1 or greater. 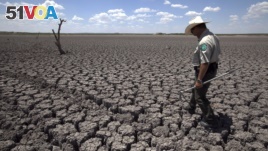 One place with the greatest difference in hot and cold records was the Southern California city of Pasadena. It went 19 years between cold records, the analysis found. It set a low temperature record last month for the first since June 5, 1999.

The AP says it has shared its analysis with experienced climate and data scientists. Several experts say results of the examination support earlier scientific research. And, the information provides further evidence that human-caused climate change has led to higher temperatures over the years, the experts said.

The use of such data is very important to identifying the long-term effects of climate change, climate scientist Deke Arndt told the Associated Press. He is the head of climate observation for the U.S. National Oceanic and Atmospheric Administration (NOAA).

Arndt noted, for example, that the first two months of 2019 showed twice as many cold records than hot ones - the exact opposite of the results in AP's analysis. However, he said such short-term differences are not as valuable as true climate trends measured over many years.

Arndt said the AP analysis shows the United States has been in a steady period of major warming for a long time. He added that this trend is expected to continue "to explore and break the warm end of the spectrum much more than the cold end."

Former Weather Channel expert Guy Walton also gave his thoughts on the findings. Walton, who has been studying hot and cold extreme records since 2000, told the AP he thinks the results show an unmistakable trend. "You are getting more extremes. Your chances for getting more dangerous extremes are going up with time," he said.

Arndt noted that such temperature extremes could have many different effects on people's lives. These include financial effects such as increased hospital stays, higher energy usage and farm losses. A recent study involving 22 U.S. states found that each summer, about 36,000 people seek hospital treatment because of extreme heat.

The Associated Press reported on this story. Bryan Lynn adapted the report for VOA Learning English. Ashley Thompson was the editor.

analyze – v. to carefully study something to learn about its parts, what the parts do, and how they are related to each other

trend – n. a way of behaving, proceeding, etc., that is developing and becoming more common

spectrum – n. all ideas, opinions or possibilities that exist