Reporter Helps Get Sports Gear to US Children in Need

Update Required To play the media you will need to either update your browser to a recent version or update your Flash plugin.
By Dan Friedell
01 March 2021


Rhiannon Potkey writes about sports for a newspaper in Tennessee.

She learned through that work that some young people did not have good sports equipment, or gear. 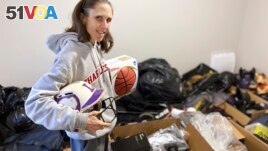 Goods4Greatness, the nonprofit started by Rhiannon Potkey, works to get much-needed gear to low-income children and teens to make sure the high cost of equipment doesn't stop their athletic dreams. (AP Photo/Teresa Walker)

She decided to do something about it.

Munro is a player on the U.S.A. Women's softball team. She was hoping to compete at the Olympics in Japan last year.

When the event was delayed because of the coronavirus pandemic, Munro started cleaning out her home in Florida. She realized she had a lot of extra sports equipment.

Munro had heard about Potkey's organization. So she sent pictures of the gear she no longer needed. Potkey helped find people in Florida who could use the softball equipment.

Munro said by making the donation, she was "paying it forward." This means to do good for someone as a thanks for the help other people give you.

One person who got some of her softball equipment was a girl who reminded Munro of herself when she was young.

"That one was particularly special," she said. "I had a lot of people do really great things for me when I was growing up."

Munro said doing something nice for a stranger made her feel good.

The U.S. is a big place. Potkey said her group saves on expenses by finding donors in the same areas as those who need the equipment.

Jarrett Walls is the tennis coach at a high school near Raleigh, North Carolina. He said many of his players never would have tried the sport if it had not been for the donation from Potkey's charity.

Last year, he said, only seven girls tried to play tennis. This year, he has about 30.

Potkey said she enjoys helping children play sports. But, there is one problem: space. The donations take up an entire room in her home.

She said she hopes to someday do the aid work full time.

"I feel like there's so much more need that I could help," Potkey said.

Teresa M. Walker wrote this story for the Associated Press. Dan Friedell adapted it for Learning English. Caty Weaver was the editor.

What sports gear would you be able to donate? We want to hear from you. Write to us in the Comments Section and visit 51VOA.COM.

charity –n. the organizations that help people in need